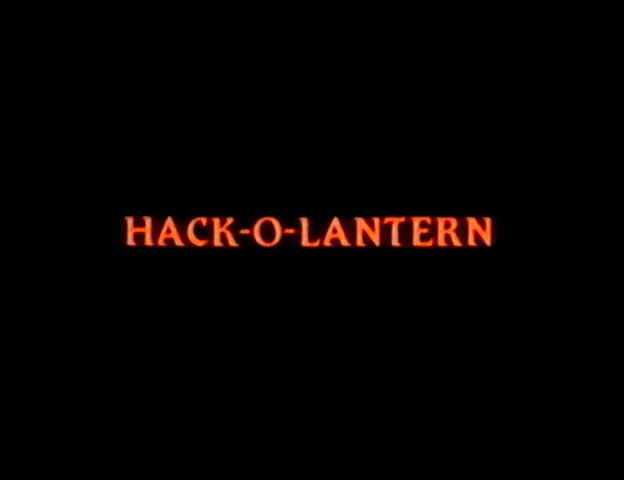 80’s horror can at times be divided into two age group camps: Adults and children, and then others that just deal with teens or young adults acting like teen. Hack-o-lantern starts out like the former, but then switches gears half way through. The movie begins with a child and creepy grandfather meeting at a pumpkin patch. The grandfather apparently has some otherworldly plans for the boy, and after giving him a pumpkin to carve, the boy starts exhibiting behavior that his parents don’t like. He throws pumpkin guts at his sister, pretends to shoot her with a toy gun, and then cuts his hand while stating that blood tastes good. When asked, he says that blood is good for him according to his grandfather. This prompts his father to confront the grandfather, only to find him in a satanic circle, but is soon killed so the boy could continue being pushed towards whatever this cult wants. 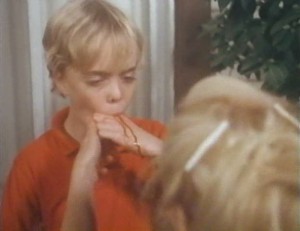 Cut to a few years later and the boy has grown (oh yeah his name is Tommy, so I suppose I’ll start calling him that since I figure he might be a main character). His grandfather is now raising him, and worse than just a member of a satanic cult, he also has a thing for his Tommy’s mother going as far as to rip her top off right before her wedding (via a handy flashback). Well Halloween is a bad time for Tommy’s mother in any case with all that went on that fateful night. Tommy doesn’t talk much and listens to metal tapes which give us a glorious video production of some very 80’s band much in the vein of Rocktober Blood or Heavy Metal Zombies. The video serves to pad out the movie but also plainly states that Tommy is the Devil’s son in the lyrics, providing some much overdone exposition.

And with as much exposition these music videos provide, they don’t explain the appearance of another sibling who suddenly shows up in the present. This is apparently the good son who ended up being a cop. The sister just ended up being a tramp, so she apparently took the middle ground. 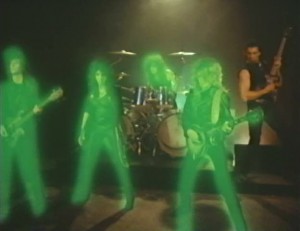 Then we move from a family in distress due to some outside (or internal) force, to a teen slasher movie. First Tommy’s girlfriend dies not long after his grandfather keeps him from seeing her. We assume it’s Tommy, and we even find that mask later in his room, but there doesn’t seem to be a huge motivation. Later Tommy protects his sister by throwing her boyfriend out of the house and killing him…later in masked form. But she’s a tramp, so she doesn’t care for this course of action (the throwing, not the killing as she didn’t see that). Their mother is more upset over Tommy being distant and the family not being whole, than any of these specific instances.

This leads to zany 80’s hijinx like the Sheriff making out in a cemetery while his girlfriend holds hands with a corpse (yet doesn’t, nor ever realizes the mistake), a blond gets a pentagram branding on her butt, and then strips at a costume party in front of everyone, much to the lack of any reaction from the audience in attendance. Although there doesn’t seem to be any branding on her, so maybe it’s just yet another platinum 80’s blond willing to go fully nude for this silly movie. But no time to ponder that, as we move to a random street comedian who we’ve never seen before giving a routine that goes on waaaaay too long, but then abruptly ends. 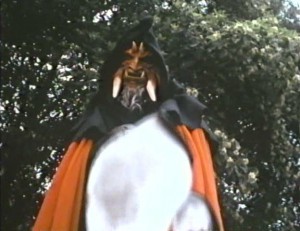 So we go through many random scenes after a relatively cohesive buildup, and of course we can’t get away without another rock song taking up the full running length of the track. But after this nonsense the sister finds the corpse of her boyfriend and confronts Tommy in the of-so secret cult location in the family’s barn. His grandfather decides to use the sister as Tommy’s sacrifice to Satan for initiation, but he comes to his senses and cuts her loose from the pre-frayed sections of the rope, just ready to be chopped.

And okay sorry, we do have to resume random scenes at the costume party as we bear witness to a snake dancer in her 50’s. This party attracts all sorts and since the sister wants to find her good brother, they have to endure pointless scenes that are sort of Halloweeny. However we do get to see a death by overtightening a corset death, but it’s ruined by a followup stabbing. I really don’t see the point. More bodies pile up, and when the masked madman is revealed, it’s the grandfather which isn’t a huge surprise seeing as he ran out of the barn with that mask in his hands. 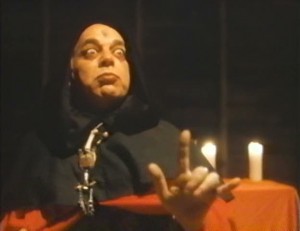 However one more masked person is running through the forest, and this actually does provide us with the twist ending and explains a fair amount of the previous sections of the movie, so I can’t fault it for that. Overall it took me a year to finally get through this, so that alone doesn’t speak well, but once I finally did it, I can’ say I hated it. While Halloween themed, it doesn’t really give off the holiday feeling, but then again neither did Michael Myers. It was just a story that happened to be on that day.
Next Post
Previous Post
Next Post
Previous Post