Chok Suwanavisootr And The Hollywood Dream 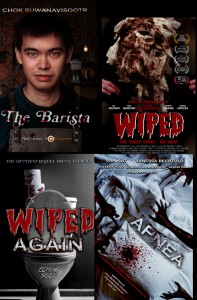 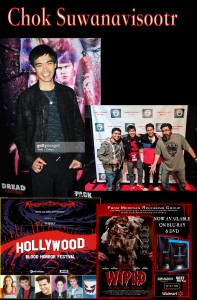 Chok Suwanavisootr is the true definition of the Hollywood dream. Entering the film industry like a force of nature, gaining success with his brand of amazing talent, and kind heartedness. A true gentleman of the Hollywood experience.

He is back in WIPED AGAIN, leading this sequel to his award winning unsanitary short film WIPED (2019), which won him Best Ensemble Acting at Hollywood Blood Horror Festival and was released on Bluray/DVD by MRG releasing in 2019. WIPED AGAIN will take place right after the tragic event of the first movie when a demon toilet paper attacks a group of friends while they are high on weed, and will introduce us to a new character (victim) and household setting that will surely please the fans of bad taste horror. WIPED AGAIN is slated to shoot sometime in 2022. In the meantime, you can check out the teaser poster above, that will make you think twice before wiping your bum.

Throughout horror history, we have seen humans being extracted into many different grotesque elements like a perfume from The Black Dahila, or even grind into a pie in Sweeney Todd: Demon Barber of Fleet Street or baked into a Christmas cookie in Black Christmas. In 2022, the world will see a new refreshing horror concept where human will be (cold) brewed into a coffee with The Barista. From the mind of Chok Suwanavisootr who created a demon toilet paper short film, WIPED (2019) which won Best Ensemble Acting at Hollywood Blood Horror Festival and is released on Bluray/DVD by MRG releasing, he will also be taking the leading role of a young promising barista who holds a dark secret and passion that will give justice to all essential workers out there dealing with naughty customers alongside Sélynne Silver (What Daphne Saw).

In late 2021 he is set to play a role of a mental patient, Joel, in horror feature film, APNEA. A Collaboration between Writer/Director Dave Maggot (Groundhog, 60 Seconds to Live) and first time Director Ivan Bernard Hruska, producer of awards winning film BLIND (2019) that starred horror legends like Caroline Williams and Sarah French and its sequel PRETTY BOY (2021).