Oh Asylum, you’ve grown so much over the years. It’s a shame that Sharknado has been your claim to fame, but whatever it takes to keep things rolling.

For the few who don’t know much about Asylum, they are a company that churns out movies commonly dubbed as Mockbusters at an insane rate for dirt cheap. You commonly see them on Sci-Fi, but since they range from feel good Christian movies to exploitation throwbacks, only some end up airing there. I’m guessing Video on Demand and Netflix are the main distributors since we’ve all come full circle and base movies on the cover artwork again… and that’s just fine with me too.

The most common example you may think about is Transmorphers, the Transformer mockbuster. The goal is to find a movie that will spend years in development, then another period of time in a theater, create a simpler version with a deceiving cover and title, and have it in video stores before the real thing. I admit I did fall for this once when Pitch Black was coming out starring Vin Diesel. I don’t even know if it was by the Asylum, but it was one based on an Isaac Asimov story called Pitch Dark or something. I sort of thought it was odd that the movie I wanted to see was out so early, and as I’m watching it, I keep waiting for aliens, and they never came. Instead it was about the psychological effects of a planet when an eclipse plunges it into complete darkness every few eons.

I wasn’t really happy about that chain of events, but now that I know know the drill, I sort of look forward to seeing their rendition of some higher budgeted movie. It’s in the same vein as the adult parodies, but with movies I can willingly watch. So needless to say the budget is slashed, and the effects follow, but they’re on par at this point with what Youtubers are doing these days. They’re all generally on the so-bad-it’s-good level, so it’s hard to fault them much. Hopefully I can do a review of Age of Ice at some point. It’s glorious.

Overall in this one, the effects have actually improved a lot. For the small spell-based VFX it really doesn’t look all that much different from larger budget movies, and it’s only the larger scale matte shots that seem a little composited. Then there’s a few times that a physic simulator generated construction dibris, but it’s nothing that you can’t roll with.

So first off, and after all that intro about title confusion, this isn’t an Avenger clone. After Lord of the Elves and/or Clash of the Empires, which hit the torrent sites as Age of the Hobbits since the first Peter Jackson one was just released, this one at least kept its name. But forget all that and just think Grimm Brother All-stars in the City. Like if Enchanted became a brawl movie. 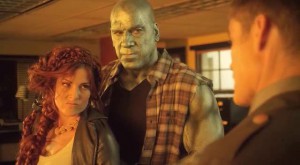 Anyway, moving to the plot: Rumpelstiltskin is the lead villain along with the Big Bad Wolf, neither who retain their altered fairy tale forms, but instead are just a male model and a bodybuilder respectively. The same goes for most of the people save for Lou Ferrigno’s altered state, which bucks the trend since he was the only notable human character from ‘our’ world.

In a nutshell, Rumpelstiltskin uses Snow White’s mirror to escape the mythical world into ours, with Snow White in hot pursuit. After their exit Rapunzel, Cinderella, and Sleeping Beauty decide to follow in order to bring Snow White back. Red Riding Hood also joins since she has a vendetta against the Wolf, but the trip doesn’t go as planned when the mirror breaks. Luckily a shard is embedded in one of the travelers, providing a chance to return.

They find that a much longer time has passed on our world, and Rumpelstiltskin has built a crime empire, while Snow White has become influential on the underground. From there, it’s a good vs evil battle with some sides being somewhat undecided. Red Riding Hood is the only non-princess and doesn’t want to play by the rules, while Lou, playing as Iron Jack, doesn’t ultimately like being played as a lackey when he was a leader prior to the fantasy invasion. 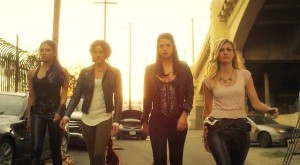 I won’t bother rehashing plot specifics as I’d encourage people to give each thing I review a fair watch and come to your own conclusions (or in the case of Half-Caste, just…don’t). But overall, it managed to overcome some of the pitfalls of most mockbusters by not copying an existing current movie, and most of all, avoid being dull.