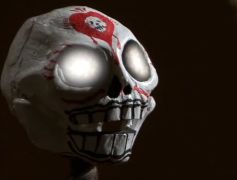 Okay, I’m back, and Full Moon is on my mind. As I continue to pour through their catalog, I finally obtained a movie that almost acted as the resurgence of their modern incarnation. Charles Band made it a mission to start producing upwards of four to five movies a year, just as they did in their hey-day. Hey Debbie Rochon said it best “when you don’t make much per movie, make a lot of them”. So this of course leaves a lot of room for junk, but we’ll assume those will remain solely with the Killjoy series.

Skull heads off the bat looks like one of the many ‘little creature’ films that Full Moon has made. It’s no secret that Puppet Master is the cash cow, and between that and Killer Dolls, Demonic Toys, and a few others, it’s a safe formula. I did like the look of them, and they seemed to at least stray from the toy/doll look for once, and almost take on a voo-doo feel. Course that could push us into [Netherworld] territory, but we’ll just hope that’s not the case.

Another recurring theme in this movie, is the location. The family castle in Italy, has been the backdrop for numerous films, and continues with this and a few upcoming movies. I mean why not; it’s a beautiful place, and provides elaborate set design at virtually no cost. Seeing the trailer for this, gave me the impression that it was far more refined than any Full Moon movie should be.

However it also showed a lot of footage of the Skull Heads, and that’s where things falter a little bit. I think there’s more footage in the trailer, than in the movie. The movie is more a home invasion/revenge flick if you boil it down. The mystical elements are thrown in to fulfill a need, but the movie really isn’t about them. 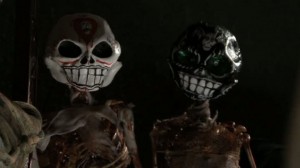 The condensed plot revolves around an overbearing and at times abusive father, his daughter, hateful wife, and simpleton brother. The family isn’t firing on all cylinders, so to speak, and a quick glimpse into their daily life makes their desire to keep outsiders away all the more justified.

But outsiders do come one day, offering to pay to shoot a movie at their castle. It’s almost a movie within a movie scenario, but the father wants no part of it, despite his daughter’s pleading for some sort of normalcy. 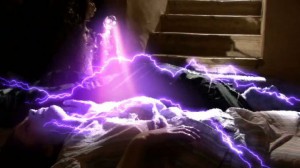 The daughter, played by Full Moon regular Robin Sydney, was previously caught with an iPhone, and thrown on the rack to be tortured. She alternates between having the mind of a child, and being a serious college bound young adult. There isn’t much transition, so it’s hard to determine what they were aiming for with the character.

It matters little, however, as half way through she provides the necessary nudity that these movies must have. Being in as many Full Moon movies as she has, one could think of her as the new Jacqueline Lovell, but with a tendency to romp around naked, rather than perform love scenes. A quick glance at her other movies such as Wicked Lake and the Femme Fatales series seems to put her in rather non-explicit roles, so here’s hoping she doesn’t burn out of the industry, and we’re able to continue to have more things to watch.