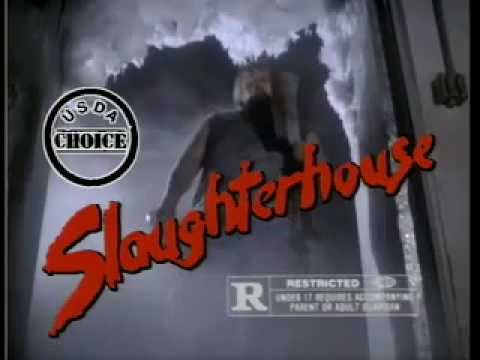 As a child of 80’s horror; who walked the halls of the video store like it was my museum. A warm, cozy feeling comes from collecting the movies of yesteryear, in my older age. My favorite sub of the horror genre; aside from zombie horror, is the slasher film. There’s something magic about the old stalk, and kill of teenagers with questionable morals. That is more comforting to me, than a big cup of hot chocolate on a winter night. The simplistic aspect, and judge, and jury nature. Of our favorite horrror killers, playing the hand of righteousness; that arrives just in time to right the moral wrongs of life. Fits like a warm glove, over the icy heart that sits in my discensitized chest.

Sometimes a pure gem will get lost in the fray, and becomes instantly logged within the annals of the underrated. This one in particular is 1987’s Slaughterhouse. Essentially the bastard son of The Texas Chain Saw Massacre, and Motel Hell. But also oh so very much more. Being the Director Rick Roessler’s, only attempt at film. Is something mind boggling. He managed to craft a work of horror comedy art, that provides an equally perfect balance of both. With a heart behind it, that tromps anything in the subgenre, that came after it.

A father, and son team, Lester, and Buddy Bacon, Facing the foreclosure of their beloved family slaughterhouse. Turn to the dark side when the Father’s Mentally challenged son Buddy (Played lovingly by Blood Diner’s Joe B. Barton) Turns to murder to solve all their problems. Don Barrett portrays the elder Bacon, with tongue placed eternally in cheek, and eye forever winking at the audience, in all the right ways. Joe B. Barton takes the character of Buddy (who never speaks a line of dialogue through-out, aside from animal sounds.) And creates a full, rich character. Equal parts adorably funny, and menacing. That makes you wish he would come back to film, for he is a master of his craft.

The blood is in good amount, and the kills are equally satisfying. The Blu-Ray was just released through 88 Films, and is currently available on Amazon U.K. In an excellent region free transfer, packed to the brim with special features. A must own for any love of the slasher subgenre.