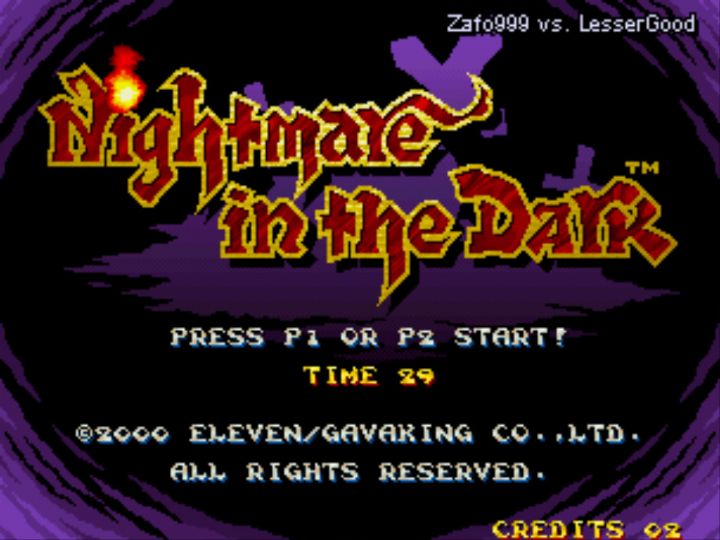 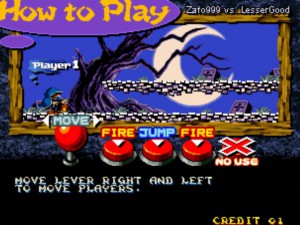 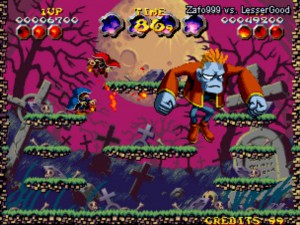 You and a buddy play as the Red and Blue gravekeepers and work together to clear levels and defeat bosses. Personally, I like to call them gravecreepers, because they are just so unapologetic about how creepy they look. The screenshots don’t do the game justice. The overall art of NitD is pretty fantastic, and harkens back to a time before horror games could really exist as their own genre and were really more of a ‘style’. (So as a heads-up, you probably won’t be having any actual nightmares about this game in the dark.) There are all sorts of comical undead beasties that lurch across the screen at you. A common enemy you’ll see is a ‘preppy’ zombie with well-groomed blonde hair and a pink Lacoste polo shirt. The superb animation and humor remind me very much of SNK’s Metal Slug series. It’s a shame that the actual gameplay isn’t as original. 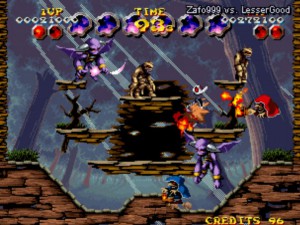 In addition to the preppy zombie my cohort mentioned, there are quite a few absurd bosses as well ranging from a super zombie to some kind of giant skull on wheels (not sure which 50’s film that’s from). These bosses are easily dispatched by simply tossing their minions at them, but one boss in particular, the last one, is absolutely ridiculous. Imagine trying to hit a boss that’s only on-screen for about 5 seconds, then imagine blowing 10 additional bucks in quarters (and that’s with a friend) on this one fight alone. However, faulting an arcade game for being a coin-muncher is a lot like faulting Mario for jumping too much. 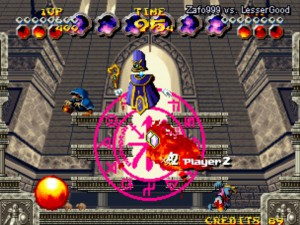 I wish there were more games like these in arcades now, and less games where I have to pay $1.50 to stand on a fake skateboard and spend the following 5 minutes figuring out how to not fall over. Neo Geo machines still aren’t that hard to find, but I’m willing to bet one running Nightmare in the Dark probably is. But I’ll tell you what. If you can find one, go ahead and enjoy it for a little while, and if you get pictures of it and tell us where it is you found it, you will win one million Goshzilla points; redeemable only at my house.