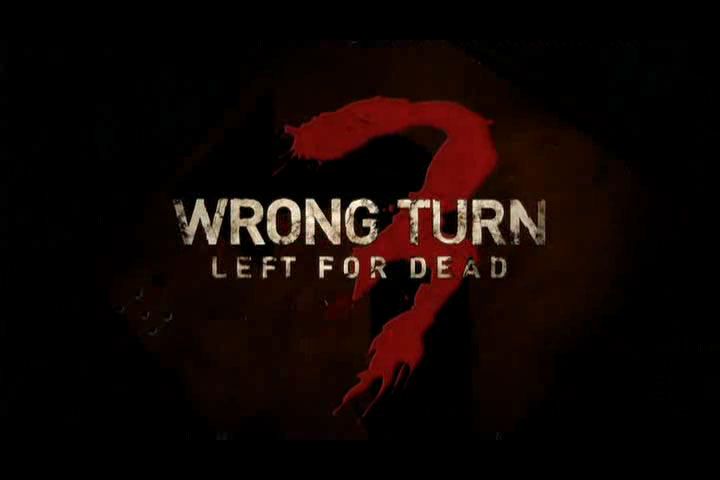 I often get Wrong Turn mixed up with Joy Ride. Each involves a car ride (sans cliche somehow) and a young actress who sells the movie by being on the cover. Well the Wrong Turn series is the one about inbred cannibals, so I suppose I should keep that in mind. I find it hard to believe we’re on the third one already. The first was a decent movie, and the second was redeemed by Henry Rollins as the hyper commando reality TV producer. With the third entry, we pretty much have Alien Invasion Arizona, but without the aliens. Same amount of toes though.

What I mean by that is the fact that the plot revolves around a prisoner transport via bus, which of course goes horribly wrong as they usually do. Instead of an intentional jailbreak by accomplice girlfriends, it’s just the mutant trying to run them off the road for food. The result is the same in any case as the guards are held hostage by the prisoners, who in term are fighting amongst themselves since there’s always that racial tension in play. I’m not entirely sure naming the Hispanic character: Chaves, really helped either. 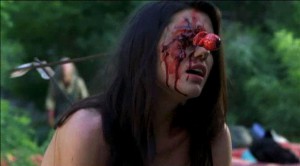 One guard gets a knife to the throat by an unseen force, another is injured, and the last is fine but disarmed. As the infighting between the Hispanics, Arians, and a presumed ‘innocent inmate’ escalate, a girl pops out of the forest as the sole survivor of the intro segment. Her friends were killed shortly after the obligatory boobie shot and the less-so obligatory arrow-through-boobie shot. As you can imagine, the dialogue through these parts was engaging and thrilling.

The girl sort of fills the bridge between a pivotal and a throwaway character if you can think of such a thing. It only occurs in movies where you honestly don’t care one way or the other. The movie then spins into a series of creative deaths all caused by the same mutant hillbilly who, due to movie logistics, can be everywhere all the time. 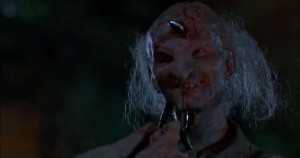 While the movie was mildly entertaining, there were just some grating parts. In true slasher-esque style, the antagonist just seems to be immortal and every chance to stop him ends in a reappearance a few minutes later in another part of the large forest. I think there are at least three ‘death’ scenes, and each has less of an effect when you know there’s still 10 minutes of running time left. At other points deaths aren’t explained at all. A female policewomen parks her car on the side of the road; she hears a noise and it’s nothing. Then later she’s tied up naked in barbed wire and promptly waits until then to croak since her screen time finally happened. Add that to the main subplot where the inmates find bags of cash in an overturned van in the woods. For one there was no road nearby, and I’m sure no one bothered to look for all the missing cash. So while the deaths are somewhat gory, the rest just makes so little sense, it’s not all that engaging.
Next Post
Previous Post
Next Post
Previous Post