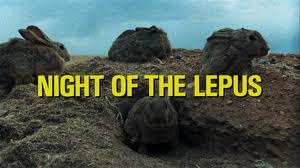 Well, this little gem of a movie was brought to my attention. It’s about rabbits. Big rabbits. So how can you go wrong with that. It’s very hard, but there’s one thing you can’t do. And that is take it too seriously. Given playing it straight came sometimes add to the campiness of the movie, this was so dead on serious, I’m really not sure what to think.

We start off with a news but about how rabbits are multiplying so fast they’re killing off all the crops and generally just not being cute like they’re supposed to. Then a horse is seen riding across the barren land and trips over a rabbit hole, thus breaking it’s leg. The rider does what any kind soul would do, and kills it. So the rabbits must go. And what better person to do it than a guy who traps bats and hates chemicals. He pops on by and throws some rabbits in a barrel to be sent off for testing. His wife scientifically describes the process as “making jack a little more like jill, and jill a little more like jack”. Freaky stuff they do in those labs.

Meanwhile, their creepy albino daughter wants to keep one of the rabbits. Knowing she’ll only be able to keep one from a control group, she picks her favourite (which is from the testing group and has just gotten a shot of *something*), and switches it with a control bunny, so she’ll be able to keep it. Well, missy, that was a big mistake, since her new friend decides to grab it and throw it out into the wild. Hence the rest of the movie takes place.

Some farmers start burning the brush for who know what reason, I forget. Some guys bring their horses to a water hole and see a rather large footprint they guess is from a 150 lbs mountain lion. The albino kid and her friend go off wandering around a mine shaft. After poking around a bit, the girl sees the body of the miner and some big rabbits. She screams and faints.

She ends up back home and they try to get the boy to answer some questions about the cave. He doesn’t remember though, so that’s not much help. They run some tests and after seeing some blood move (ain’t it always the case) they determine that the rabbits have grown. So they all go on a field trip with some TNT and scope out the cave.
They find some holes in the top of the cave and throw some rocks in. This causes a lot of howling. The scientist goes in to explore the cave and comes across all the rabbits and takes some pictures. They start to chase him, and as this is happening, one rabbit comes out of the ground and attacks someone. Everyone gets out of the cave and they set the dynomite off, and blow it all up. But later on in the night, the rabbits emerge from the rubble and come to town.

So the rabbits are none too please and annoy the horses. The horses make a commotion and break out. Some guy drives off in his truck and manages to take out the phone wires so the scientist can’t call for help. They guy who was driving the truck falls out and is eaten while the people down at the police station leave and the receptionist gets eaten. Same for some convienence store. The deaths just keep on rollin’ baby. You know what time it is.

Some guys get in a helicopter and visit the cave. They throw some rocks in and look at the scenery, then head back. After talking at the police station, the rabbits are outand about causing trouble, so the guys form a plan.They decide to electrify the rail-road tracks. One done, every single rabbit falls across the track and dies. The END

I sorta skipped out on any details towards the end, because there’s not a whole lot to say. There were some cartoons and a scifi epic about a man who turned invisible after the movie, but I couldn’t watch them. It had just been too much to deal with after watching the lepus. So all in all, had it not been so serious, it would have been an entertaining movie. Maybe.