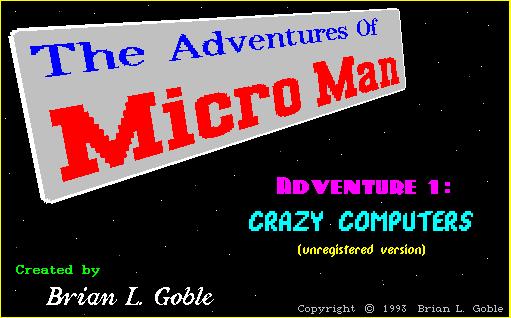 In the early 90’s the only games I played were in the Goblins series. It was maybe five years ago from now when I played Microman and by then I had other games to play like KOTOR and Rayman 2 and, admittedly, Microman fell by the wayside. Now, 16 years after its initial conception, the demo version of Microman resurfaces on Tigsource, and here I am reviewing it.

You take on the role of the titular Microman. Having been shrunk down to a molecular level, you have no hope of being returned to your original size as the machine responsible has blown up killing all nearby personnel. Grim. 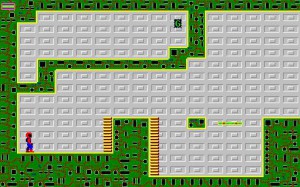 As you navigate the maze-like computer world, numerous denizens of this realm pose a threat to our hero. The most notorious of these is the Bubble Ship Boss: a blue UFO that periodically crosses your path, launching heat-seeking missiles. Much like Sinistar, but not nearly as terrifying, the Bubble Ship Boss verbally threatens you numerous times during each encounter. Eventually everything comes full circle when you encounter him near the end where you must defeat him in order to finish the game.

The controls are easy enough to pick up with numerous power-ups that can come in handy during your travels in the computer world. Only real complaint I had was that Microman moved at a snail’s pace when compared to all the projectiles and enemies zipping around on a given screen.

The game is challenging and, depending on what version you play, incredibly unforgiving. All I could find on Tig was the version 1 release. In short: omission of save points, bottomless pits (resulting in game restart), and trap rooms that you can’t escape from (resulting in game restart). These issues would later be rectified in versions to come, but if you didn’t have access to them, you were certainly in for a challenge, but don’t let that discourage you.

Microman’s emphasis on exploration is a refreshing aspect differentiating it from many platformers of that time.