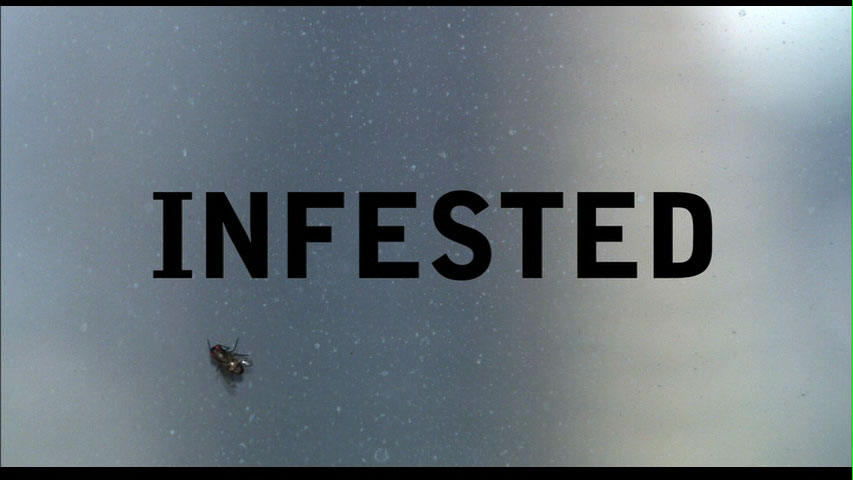 Well this was a treat of a movie. It had all the ingredients for a silly sci-fi monster movie. Bugs, host bodies, death, finale explosions, and lots of unrealistic CGI. Plus Amy Jo Johnson kicking more butt than she ever did as the Pink Ranger.

On first viewing, the camera work just looked too good and I figured that I stumbled upon a decent movie. That feeling faded later on with the first exploding fly however. So we begin with a camera pan that outlines a day in the life of several people, all whom are supposedly connected in some way. They received a phone call that one of their friends has died and they need to drive out to the boonies to see him buried in his backyard and then party at his house. 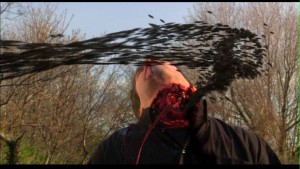 At the funeral, a priest gives a doom and gloom speech that depressed everyone, but they all soon feel better once they get into the house and start mingling. One guy breaks out the vinyl and starts blasting Da, Da, Da by Trio. No joke. They all get onto the dance floor and get silly, which prompts the husband to become angered and drive off and hit someone.

They let him go since he was a jerk, and they don’t care that he took one of the three cars needed to bring everyone home. This matters little since they have some swimming to do. They guys aren’t allowed to go, so they wander off for a walk and get bit by a bug. The fly lands on the ground and explodes in a puff of smoke and CGI fire. 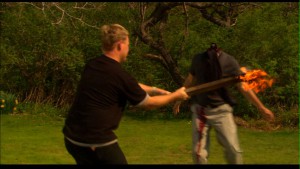 Down at the beach one of the women stays to sunbath and then goes to reach for her bag. It somehow has been moved down the beach. But by who, the husband who is going to fool around, no a fly of course. They fly then takes over her body and infects the husband who wanted to fool around. It all comes around in the end. They head up to the house and start ripping the car apart and fighting with they other guests.

After a brief battle, the infected guy’s neck blows apart to release more flies. He doesn’t seem to need his head anymore, so he pulls it off and throws it away. Then one by one under different circumstances, the people become infected until it’s just down to the Pink Ranger and the drug pusher. They attempt various things like getting a cell phone to work, and using bug spray. In the end, the only thing that does work is the vinyl records playing Da, Da, Da. This makes the bugs die, and for good reason. 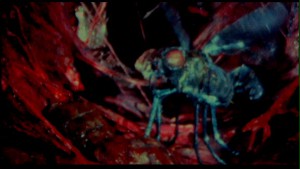 The CGI seems to be some sprite based particle system and doesn’t come off as very convincing, but it’s fun enough to look past. Although for some reason, the shiny shot on video CGI switched to actual models shot on some grainy 16mm stock for the stomach scene, then back again. Acting is good all around, and I can’t complain. The plot is pretty standard, but did keep me watching. I didn’t have the urge to fast-forward, and that’s always a plus.