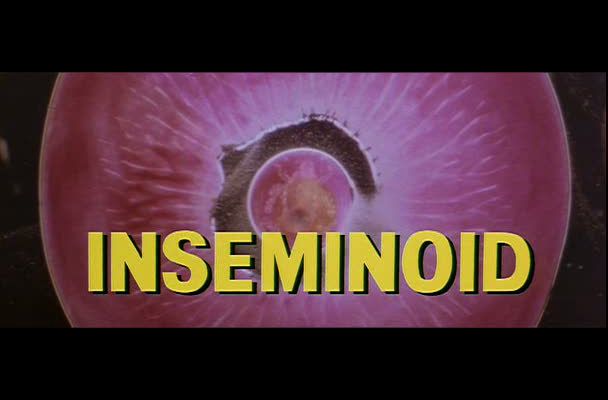 If you told me that the first thing I was going to see, after countless millennia of slumber, was a “Z-grade” film about an alien that impregnates women, I would have stayed buried. Imagine my chagrin when I was unearthed for the sole purpose of reviewing this film and others like it. Inseminoid‘s story isn’t difficult to grasp if you’re familiar with what the title implies: an alien that inseminates its victims, in this case a human female, with its putrid progeny so that they may carry out its monstrous agenda of eating and inseminating more people. I’m not sure what the appeal of this film is since even the most perverse internet closet case wouldn’t find this attractive. 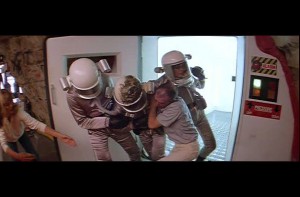 One of the most abhorrent aspects of this film is the deceptively approachable first eight minutes. We learn that a planet possessing an ancient and complex tomb structure is being investigated by a science team. Just as you start to take it all in, the story spontaneously devolves into a bloody mess of bad acting, technical flaws, and poor writing. This film is absolutely rife with some of the most absurd acts of human stupidity[break] I’ve ever seen. At one point in the film, one of the scientists is possessed by some unknown force of the planet and runs out of the airlock. A woman pursues him, but gets her foot caught in a piece of debris. With her suits temperature control damaged and no way for anyone to help her, she does the only sensible thing. No, she doesn’t free her foot from the debris she purposely wedged it under nor does she join a big bright yellow wire to a blue wire on her suit to fix the temperature control as instructed. No. Instead, she opens up her visor, exposing herself to the atmosphere, sticks the oxygen tube in her mouth, and proceeds to saw her foot off with a pair of high-tech hedge clippers. 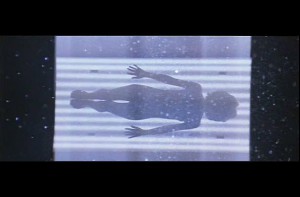 As things start to settle down for the research team, Sandy, one of the few characters in the film I know by name, is assaulted by the Inseminoid. In a dream sequence more akin to a David Bowie music video we get our first look at the horrid thing. In general I find human coupling repulsive, but what makes this scene especially awful isn’t the interspecies intercourse, but the mere fact that Sandy does absolutely nothing to resist the creature or its “docking procedure.” In fact, at one point, she even appears to be enjoying it. Regardless of her motivation, mere hours after gestation, she starts showing symptoms of pregnancy: nausea, bizarre appetite for human flesh, homicidal tendencies, Hulk-like strength. 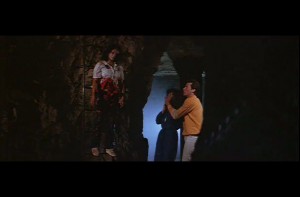 It isn’t long before Sandy is on the prowl murdering every living thing she sees; possessed by a natural instinct called “bad writing” where she feels she must protect the things in her womb. Eventually, Sandy finally gives birth to two wrinkly puppets in a long and overdrawn scene involving lots of screaming and lots of sounds reminiscent of rending flesh. Determined to stop his lover or die trying, Mark, our hero, goes out in search of her and instead finds the babies. What does he do? Wraps them up like little babies and takes care of them before handing them over to a colleague and hunting Sandy.

In the climax, where all the film’s excitement is supposed to overflow, Mark and Sandy engage in a drunken push-fight before Mark finally strangles her to death with electrical wiring. The deed done, Mark returns to his colleague only to find her dead with one of the progeny feasting on her while the second lunges at him from the shadows. There is an epilogue involving a military unit investigating the base and accidentally bringing the two creatures back with them, but I was too bored and annoyed to care at that point. 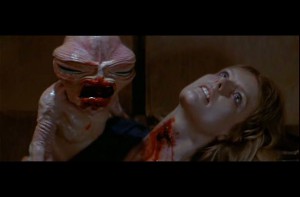 There are so many things wrong with this movie and it’s not just the interspecies relations that is the very fundamental of the film. It’s the acting, it’s the budget, it’s the writing, IT’S THE SOUND! My word! The soundtrack is a painfully long ballad of electronic “beeps and boops.” It’s like some tiny man with a Casio keyboard was sitting nervously at a table with big, goofy headphones on and whenever an action scene came, he just mashed 8 different keys at once. The sets are surprisingly wooden for a movie set in the distant future as evidenced during one of Sandy’s rampages where she knocks over a computer and you can clearly see that it’s hollow and held together by wooden joists. About three-quarters through the film, the actors show a marked decrease in performance from the already stiff acting present in the beginning and the story just goes in circles with no kind of resolution or closure. Mark cradles and takes care of the alien offspring of Sandy without questioning or even marveling at them for a second. The woman who cuts her foot off earlier in the film takes off her mask and dies of exposure before she dies of blood loss, and why did she even bother to do that in the first place? 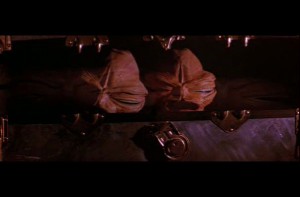 It’s no secret that this film is nothing more than a weak attempt at capitalizing on the success of Alien, a film that predates this “piece” by at least two years. However, where Alien was a success for it’s engaging protagonist, claustrophobic environment, and amazing sound design, Inseminoid is just a bad film made even worse by the presence of an intriguing premise (exploration, alien ruins, etc.) that doesn’t really pan out in the end.
Next Post
Previous Post
Next Post
Previous Post