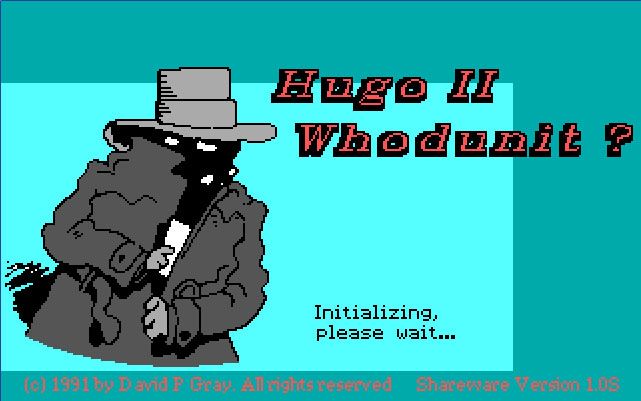 It’s been a while since I’ve written anything for Goshzilla, and I’m all torn up about it! I’m seriously doubled over in agony as I struggle to type out this article. I’m going to present you with the infamous sequel to the shareware adventure game Hugo’s House of Horrors. A game not only infamous for daring to actually follow up the weirdness of the first Hugo game, but for also being mercilessly difficult, especially compared to it’s predecessor. [break] If I wanted to justify my lengthy absence from this site as well as the crippling pain I am in, I could do so by saying that I’ve spent the last 8 months trying to beat this game without any help. But that would be a lie. I’m going to straight up admit to you right now that I had to look up walkthroughs for this game, because if I hadn’t, my girlfriend would have left me and I’d be living in the back of a van, scratching the words “Apparently our hero doesn’t understand what you mean” into my forehead with a rusty nail.

Hugo’s Whodunit takes our CGA-toned hero and his freshly rescued girlfriend and puts them on a plane to Europe for a nice relaxing MURDER MYSTERY. The couple is visiting the beautiful secluded cottage home of Hugo’s Great Uncle Horace. Not only is the change of scenery a welcome addition to the Hugo saga, we also get our first real look at Hugo’s girlfriend Penelope, who is now a fairly normal looking woman instead of a 7-foot-tall vaguely female silhouette. We’re treated with a somewhat familiar foyer where a “saucy French maid” insists you check out the bedroom you’ll be staying in. Being the rebel that I am, I refused, just to see what happens. The maid insists that you go to your room, and if you continue to ignore her long enough, she completely loses her shit. In fact, my refusal to play along caused a message from David Gray, the author of the game, to appear and let me know that I’m being a dick. I appreciate this kind of thing being in the game. It let me know pretty early on that there was going to be a few more layers behind what was on screen compared to the bare-bones affair that was the original Hugo game. 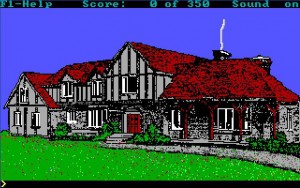 Hugo and Penelope settle into the guest room to get some rest after their long trip. Penelope passes out in the bed, while Hugo, in true Ernest P. Worrell fashion, bumbles his way into a secret passage behind a bookcase. Penelope wakes up, hears a confrontation from the adjacent room, and while peeking through a keyhole, witnesses the murder of Hugo’s Great Uncle by an unidentified assailant! From this point on, you take control of Penelope and help her explore the countryside, locate her idiot boyfriend, and figure out who the killer is. That’s right, kids! This game has a PLOT! 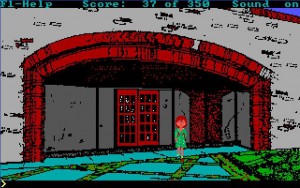 It’s interesting watching the Hugo games mature from one to another. The first game really did feel like the whole thing was kind of being made up as the author went along. This installment shows many improvements. Not only is there now a (sort of) real story and (sort of) real characters, but the variety in the parser and the puzzles seem to have grown. Actually, let me clarify. Compared to the narrative and design of every other adventure game out there, Hugo’s Whodunit’s is somewhere between “barely there” and “not horrible”. But compared to the first Hugo game, it’s the greatest story ever told. I’ll admit that knowing there is a mystery to be solved kept me interested in seeing the game through to the end, as opposed to just throwing my computer out the window and lighting myself on fire out of frustration. However, the part where Penelope uses a phone booth to teleport herself to planet Retupmoc in order to obtain a Sonar Screwdriver from Doctor Who seemed a little far fetched, even by Hugo standards.

The graphics kind of half-improved. There are plenty of screens that look presentable and almost professional. They appear to be digitized photo images edited to fit into the game. However, walk over to the next screen, and suddenly you’re back in a hideous Hugo-land where it’s cool to abuse the “spray can” feature in your favorite DOS painting program. 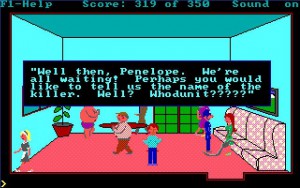 There are a fair amount of absurd downsides to this game. Almost all of which derive from a huge game design flaw that is positively littered throughout the adventure. That flaw being that there are a dozen different things you can do that will keep you from being able to beat the game… but you never know what those things are… even when you do them. Here’s one of the more maddening examples: Towards the end of the game, there is a dining room where Hugo’s Great Aunt Hester is waddling around in. There is a table with some papers on them, and shelves filled with wine glasses on the wall. Hester invites you in and offers you a glass of wine. As she prepares your wine, her back is turned for about 5 seconds. During this time and ONLY during this time, you have the option to look at the papers on the table. Let’s say you DO look at the papers. You find that Hester has taken out an insurance policy on the life of Great Uncle Horace. After some pleasantries with Hester, you leave the room and notice a police officer entering the living room, initiating the big finale where you will be asked to solve the mystery! Okay, let’s say you DIDN’T read the papers. The pleasantries between Penelope and Hester are exchanged the same as before, and then you can leave the room. But this time, the policeman is NOT seen entering the living room, and the big finale never happens. There are no messages saying you screwed up, and absolutely no hints or logical connections as to why reading some papers causes the policeman to show up. Unless you already knew that you were supposed to read the papers, you WILL spend HOURS wandering around the entire game wondering what to do next. There are multiple instances exactly like this, with absolutely no story or game elements to help you. 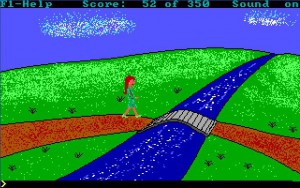 This game also contains one of my least favorite video game tropes ever conceived: The Maze. Hugo’s Whodunit has a gigantic hedge maze that you must wander through in order to obtain three essential items. There is no map, no hints as to which way to go, and no way to know what it is you are looking for. You may wander for 20 minutes, find a gun, then think “Hey! This must be what I’m supposed to get in this maze! Better head back!”. Sorry, idiot, you also need to find a bell and a bottle of serum… OBVIOUSLY! Let’s see, what else? Ah yes. In at least 3 different areas, there are times where you must inch Penelope pixel-by-pixel through what will feel like an invisible maze just to get by some venus fly traps, or in one instance, a bridge. Yes, if you cross this bridge but bump against the edges of it, you will drop a book of matches into the water, ruining them, and making it impossible to beat the game. THE GAME DOES NOT TELL YOU THIS. The game will continue as if it is a normal adventure game and not a sadistic slice of hell that has wormed it’s way onto your computer screen. Seriously, what kind of game forces you to play it even after you’ve failed? It’s like someone murdered you and you’ve been wandering around as a ghost, but you don’t know it! Nobody acknowledges you and you don’t know why. You go to IHOP and the lady NEVER seats you. And this continues FOREVER. That’s what this game is like.

Honestly, this may be the most frustrating adventure game ever made. I am up at night trying to decide whether I utterly despise it, or humbly respect it. 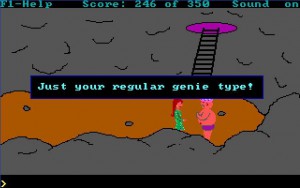 Mmm… I’m pretty sure I hate it. Don’t get me wrong, a difficult game can be very well designed and very rewarding. I love Super Ghouls n Ghosts: A game that asks you to flawlessly perform split-second jumps and attacks with absolutely no room for more than a single mistake. I love Adventures of Lolo: A puzzle game that asks you to calculate precise and heavily-layered solutions to seemingly endless levels. But that’s just the problem, Hugo’s Whodunit doesn’t ask ANYTHING of you. It doesn’t ask for you to be extra perceptive and pick up on subtle clues, because there are none. It doesn’t ask you to think creatively to solve problems. The only thing it asks you to do is to play a game of trial and error for hours on end. Either that or it asks you to simply know the answers ahead of time.

This is the longest and maybe the most interesting of all the Hugo games, but it may also be the least fun. All but the most devoted adventure game nerds should stay away! 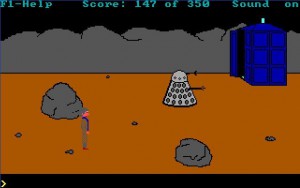 Stay tuned for my article on Hugo 3: Jungle of Doom! In the meantime, feel free to destroy your soul with Hugo’s Whodunit, which can be downloaded here: http://www.dosgamesarchive.com/download/hugo-2-whodunit/

P.S. Uncle Horace was never murdered. He was practicing for a play. =D