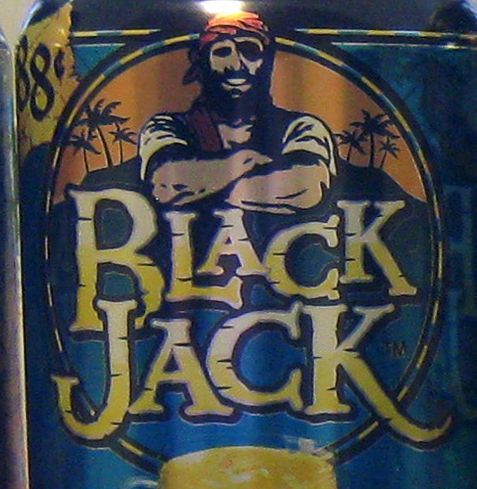 This review cost me over $4, so I think I’ve hit my quota for spending on reviews. I suppose that isn’t too bad for six rather large cans, but then again I suppose they should be six good cans of something. Either way we all still lose.

Ranging from 60-70¢, each of these came in an over-sized can and probably per ounce are many times cheaper than Red Bull or otherwise, but I wouldn’t say they are a better value by any means. We’re split between energy drinks, and teas/lemonades. Let’s dig into the teas first.

Black Jack sounds a lot more diabolical than it is. I’d imagine it be some sort of adult beverage with that name, but I think instead it just gives you scurvy or the plague like any good pirate related product should. First up is the standard Lemonade. Less a lemon drink, than a acidic liquid that seemingly burns a hole in your stomach. It’s akin to Sunny D I guess, but that was terrible too.

When I moved to the Tropical Green Tea, I knew I was going to hate it. I’m not a fan of Green Tea to begin with and adding mangoes or whatever didn’t seem like a good idea. However it wasn’t half bad. Out of the batch, it was certainly tolerable and probably went down the quickest.

Cannonball Black tea is one of the better one as well. It’s basically and iced tea, and doesn’t have too much of the citric acid tang like the Lemonade. It’s really just your ordinary flavor, but it isn’t terrible.

Now we move to the energy drinks. Never heard of Cintron, and that sounds like vodka or something too. The tagline is ‘Taste the Difference’, and somehow I don’t think that’s true. It’s either going to be terrible or taste the same as every energy drink…ever. Even Moxie energy drink tasted like Red Bull. There’s no escaping. Well the normal one ended up tasting pretty much like you’d expect, perhaps just a little worse. Luckily for you, and not me, I found a Tropical Azul, and a Cranberry Splash.

I figured I’d start with the Tropical one first since I imagine the Cranberry shouldn’t be too bad, and I best get the gross one out of the way. I’m not a huge fan of tropical flavors, and this pretty much matches. Initially it’s a guava flavor on top of normal energy drink tang, but then the aftertaste kicks in and kicks you. A second sip reminds you that the first wasn’t really that good after all, and then you still have 15 oz left. It’s bright blue too, which seems useless being in an opaque aluminum can.

I saved Cranberry Splash for last. Being near Cape Cod and their abundance of cranberry bogs, I undoubtedly was surrounded by cranberry themed drinks for most of my life. I figured you can’t go wrong with a fizzy cranberry, and I often used to mix seltzer with juice to make my own soda. At least until I realized Polar Springs did that already. This one has sort of a Cranberry flavor, but it’s not really as strong as it should be. On the other side, it doesn’t really have that energy drink flavor either. The aftertaste isn’t too bad either, so in the end it’s a weak cranberry soda.

So the lot was hit or miss, but the on redeeming factor was the work put into the Black Jack cans. 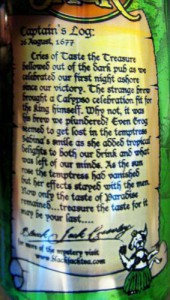 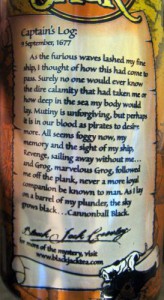 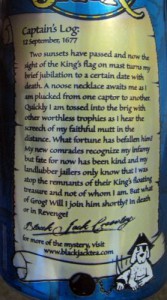 Each can provides a piece of the story. I’ve included them in chronological order. The journal logs each provide some insight into the flavor of the drink too. I have no idea if there are more entries. The can lists a website, but I prefer to keep these tidbits a mystery as it seems far more interesting to only have half the story. Grog seems to be his dog, which wasn’t readily apparent. Through the three panels, Black Jack finds an exotic island (Tropical Green Tea), is forced to walk his own plank – dog in tow (Cannonball Black), and finally is captured in a cage (Lemonade) only able to hear the cries of his dog.

It only provides a few moments of entertainment, but I did like this much more than the actual contents. Plus pirate stories are just cool.