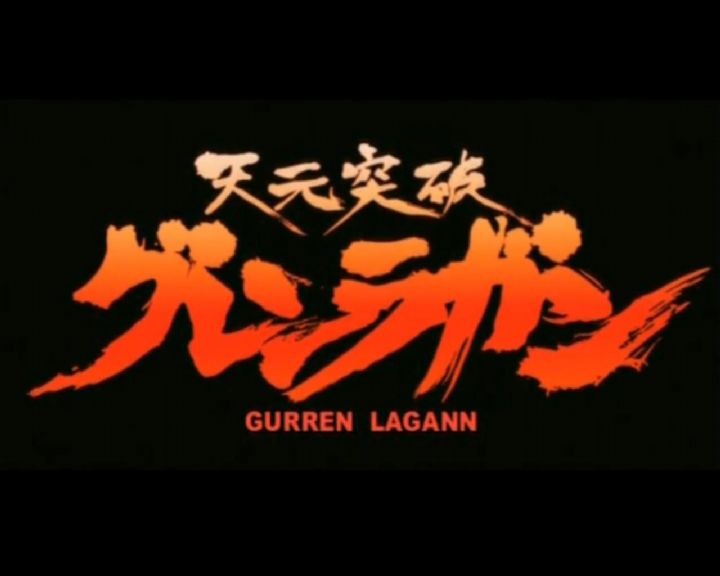 From LesserGood: We have currently been unable to reach Brian pending a reevaluation of his activity on the site. Please enjoy this review he sent in advance while we attempt to track him down.

A while back I reviewed Dead Leaves, an anime so visually expressive and fun to watch that it went well beyond the archetypal trappings of what it means to be “anime” in this day and age. Directed by Hiroyuki Imaishi, he would later move on to direct Tengen Toppa Gurren Lagann in his first time directing a full-length series. While there’s no denying the magnitude of Gurren Lagann, with the overall scope, intricate story arcs, and complex character development, in comparison to Dead Leaves, the series felt a little restrained. 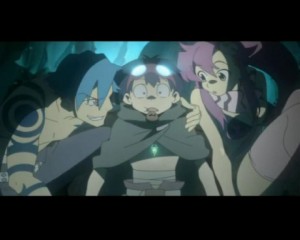 If I see the name “Hiroyuki Imaishi” attached to[break] a project, I expect fluid and expressive animation direction. While you get that in Gurren Lagann it often ends all too soon giving way to long drawn out monologues and character development. In short, the combination of conventional storytelling with unconventional anime-style creates a kind of hybrid that manages to not really get too risky with itself. Playing it safe doesn’t hurt the producers in the long run, in fact it pays off in the end, but the trade-off is that the series hardly stands apart from the literal MILLIONS of other “coming of age” anime stories involving giant robots because of its unwillingness to really step outside the box and, this is key, stay out. 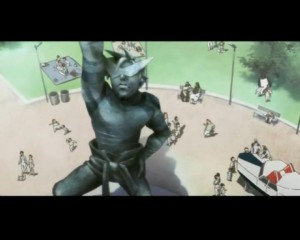 Since this is a series, I could spend hours talking about the storyline, but I won’t get into too much detail. You should really see this for yourself. Ultimately, you have a boy named Simon who starts out a wuss and makes a gradual and logical progression to unwieldy badass. You’re there from the very beginning and as you watch how he grows and shapes, you’re right there cheering him on in his endeavors. Characterization was handled very well which I’m honestly not used to seeing a lot of in an anime. Simon isn’t the only one either, a wild man named Kamina (his mentor of sorts) and a tomboyish gunslinger girl named Yoko all add to the rich and diverse character archetypes that influence and help Simon develop into a man.

Another interesting thing to note is the stark change in tone as the series transitions into its second act. A little more than halfway through the series, we flash forward to where Simon is now an adult. The first half of the series, dangers were epic but almost trivial as viewed through the eyes of a child. Now an adult, Simon is faced with deceit, betrayal, power struggles, politics, lose-lose situations, and every other boring adult-related problem. 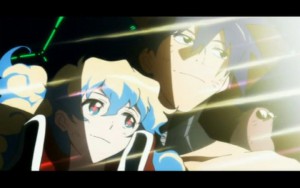 Gurren Lagann manages to find new ways to jump the shark, almost to the point where you’re never really concerned about any dangers the characters face. However, the story ends just before it manages to wear out its welcome so what you ultimately are left with is a well-crafted story of human life from start to finish against the backdrop of pitched battles between giant robots. It’s almost in danger of being “just another anime” but manages to bring that little something extra to the table thanks to the fantastic animation and Imaishi’s direction. You just wonder how much BETTER it could have been were he not so restricted by the “rules” of what makes a successful series. If I were to use an analogy to describe it best: it’s a prize-winning stallion kept in the stables. As a hybrid not getting too cliched and not getting too artsy, Gurren Lagann succeeds in getting its point across which is, besides giant robot and action figure merchandising, to seize the day and make the impossible possible. A simple message that can easily be lost to the generations of trying times.