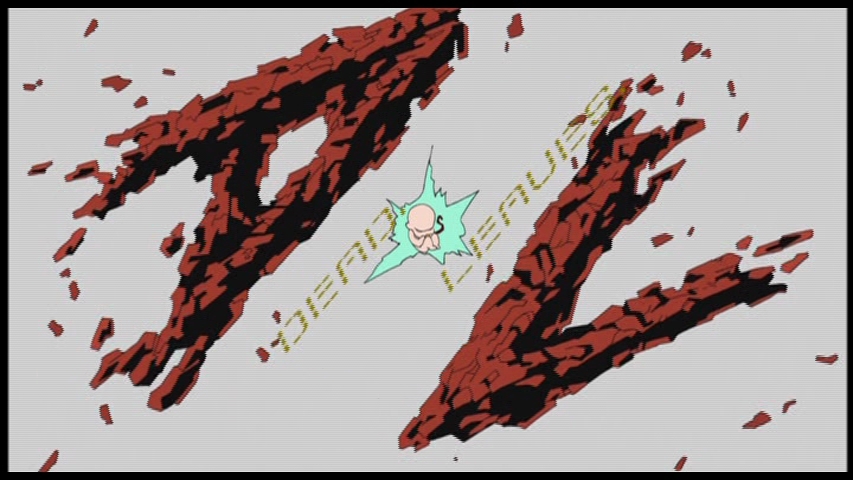 ‘Ope, an anime review. It’s all going downhill from here. Or is it? Nah, probably not.

Dead Leaves is what I would imagine Blues Brothers would be like as a cartoon with more violence and a shot of acid. The story revolves around a woman named Pandy, because of a red dot around her right eye, and a talking TV with a human body named Retro. Waking up completely naked in a field just outside the city, they have no memory. So what are two naked amnesiacs to do? Why, commit all sorts of heinous and anti-social crimes, of course! 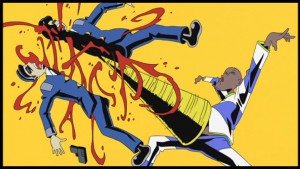 No more than five minutes after their awakening, they’re stealing clothes, stealing cars, breaking jaws, and blowing up police cruisers. However, their joyride soon comes to an end when consequence catches up with them. They are apprehended by a company of policemen and sent to some maximum security space prison mining colony on what’s left of the moon.

While serving, both Pandy and Retro conceive a child and the usual process involved in such a matter somehow manages to free them from their restraints. Having been freed, they proceed to free all the other prisoners and stage a stationwide coup. Along the way, they end up facing off against two super soldiers “666” and “777” and even a female warden whose arms unfold into massive fans of blades like a Swiss army knife. 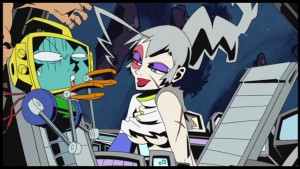 Sounds pretty crazy, but that’s the whole point of the animation. Characters are often drawn inconsistently, and the animation is so fluid that it’s beyond natural and your mind realizes it quicker than your eyes. Dead Leaves is an anime, true, but honestly, it only shares that distinction in terms of country of origin. This is literally a universal cartoon. I defy you to watch this in any language (other than your own) without subtitles and tell me it isn’t as entertaining.

One must realize when watching this film, that the goal is pure entertainment, an adrenaline rush of pure mayhem and animated carnage. The goal isn’t to excite you on any kind of intellectual level and the story, if present at all (and the jury is still out on that), is sparse and incoherent at best. Each frame of animation is like a panel in a comic book, expertly drawn and painted for maximum effect. 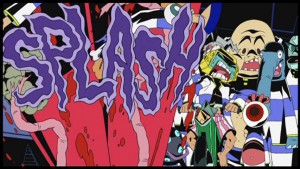 Guns go off with the appropriate sound effect, but also an accompanying “BOOM” as well. Dead Leaves is what you might imagine an animated comic book to be. Facial expressions are appropriate for the context and expressive beyond what some might be used to with the usual “cookie cutter” anime genre.

The fight scenes come and go in predictable intervals from long drawn out fights to brief moments of rest, to insanely violent fights. Each fight scene builds upon the other outdoing its predecessor in both velocity and intensity. The scenes themselves are Baroque in nature, often requiring multiple viewings in order to take it all in.

In short, Dead Leaves is animated art, plain and simple. It exists for the sole purpose of entertainment and delivers again and again on that promise. Stimulating the senses making your eyes move across the screen, taking in every detail.