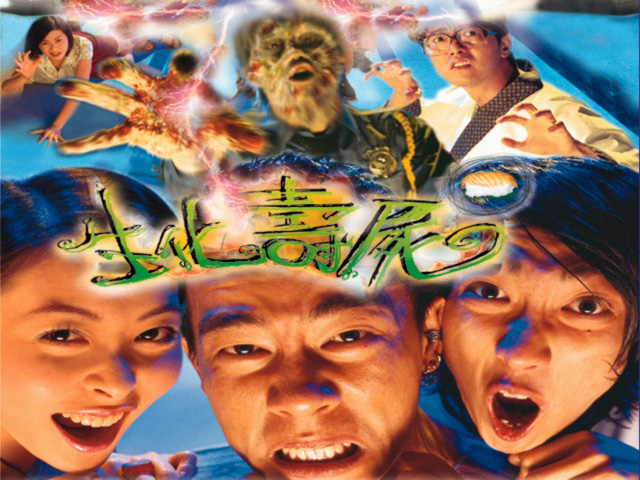 I just want everyone to know how hard it was to capture screenshots for this movie. I use VLC for most of my movie reviews as do my colleagues and if the film is shot on digital, you have a tendency to end up with a lot of these choppy, scan-line photos. That being said, I love this movie much for the same reason I love <a href=”http://www.paramountpictures.co.uk/romzom/”>Shaun of the Dead</a>. Anything that trivializes some kind of serious and/or horrible apocalypse scenario usually wins in my book.

Our story starts with Woody Invincible (<em>Jordan Chan</em>) and Crazy Bee (<em>Sam Lee</em>) being slackers. In one of Hong Kong’s humongous indoor malls, they have their own video rental store where they are constantly harassed by a nerd who makes <a href=”http://www.imdb.com/name/nm0702841/”>Data</a> look badass. 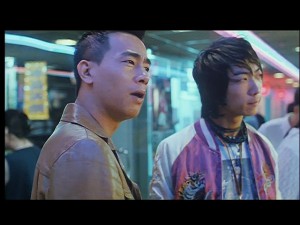 Meanwhile, in another area of the indoor future city, is Jelly (<em>Suk Yin Lai</em>) the really cute girl you see to the right. These are really the only characters you need to know about. As the three go about their day, sticking it to the Man, unbeknownst to them, a shadowy deal is being made.

In an undisclosed location, the representatives of the Chinese government are making an exchange with some ambiguous Arab/Israeli men in suits. The package: some kind of viral contagion; an elixir packaged to look like a soft drink which turns people into zombies. Why did they bother to put this potent potable in a soda bottle? Don’t ask. It’s never explained and will never be explained. This is a slacker-zombie movie, goddamn it! Anyways, the deal goes sour when the test subject zombie escapes from its crate and crashes the party.

Despite the zombie being killed, the Chinese representatives have fled in terror. The one carrying the suitcase with the zombie soda is hit by a car driven by none other than Woody and Bee. As the man desperately clings to life, Bee thinks he’s thirsty and gives him a sip of the zombie soda. Summarily stuffing the man in their trunk, leaving him for dead, they return to the mall and thus begins the zombie outbreak. 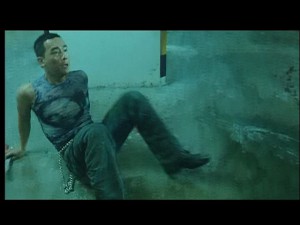 Comedy is an indispensable tool and the movie uses it to great effect, building and stretching tension to the breaking point before slicing it in half with some kind of slapstick joke or over-the-top zombie take-down. There is a relevant narrative and a couple interesting arcs including one involving a struggle between Woody and his greedy and inconsiderate brother who is also trapped in the mall with them.

Elements of Romero’s zombie canon are more heavily referenced in the undead apparently retaining fragments of their memories and performing activities that their former selves had engaged in. One scene in particular involved a zombified sushi chef making “zombie sushi” for a bunch of zombies. If you were wondering what “zombie sushi” is, it’s basically 50% rice, but instead of fish, it’s human fingers. 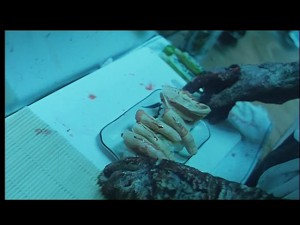 Much like Shaun of the Dead, a scenario arises where someone decides it’s better to blend in with the walking dead than fight them. This results in Jelly having to eat one of those finger sushi pieces, which doesn’t pan out so well.

One of the best parts of the film is towards the end where they are down to only three survivors, and one of them is on his way to zombie-town. Woody desperately scours a security station for any ordinance he can use to defend himself. Picking up a revolver, he examines the empty chambers as a message ‘RELOAD’ flickers on the screen. In the very beginning of the film, they were playing House of the Dead and for them to bring that gag around full circle really lightens the mood for what’s to eventually come.

The only thing that might turn some people off about this film, is the amount of time spent in the beginning with character development. I personally think that this sort of thing is important in adding to the experience, but viewers might have a hard time waiting for the film to finally take-off into an adrenaline-filled zombie massacre. 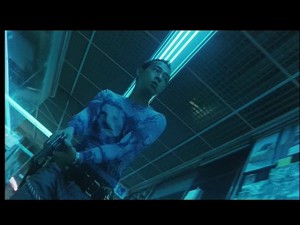 If you liked Shaun of the Dead, there is no doubt in my mind that you will find Bio-Zombie equally or more entertaining. Tense situations and acting build you up but the comedy keeps you from boiling over. It is an end game scenario that isn’t afraid to laugh at itself and break the fourth wall for the sake of entertainment.