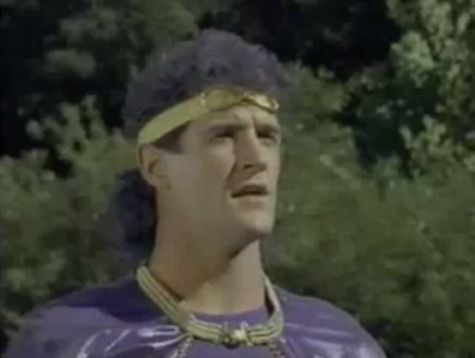 I apologize in advance for the quality of these screenshots. It wasn’t easy finding a decent copy of this movie.

It has proven quite difficult for me to really, seriously, hate or even get angry about the existence of a movie like Creating Rem Lezar. The terrible acting, cornball dialog, horrendous musical numbers, laughable special effects, and fatuous plot (pretty much everything about this film) all present volatile fodder for[break] a spirited rant, but I simply can’t do that. All these god-awful traits have somehow managed to culminate in one of the worst and most unintentionally hilarious movies I’ve ever seen. 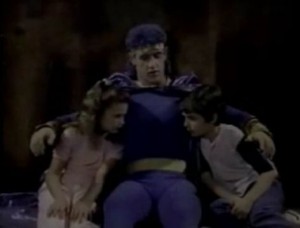 There isn’t a whole lot to the plot so I won’t go into great detail about it. Two kids, Zack and Ashlee, have trouble paying attention in school because they are too busy thinking about an imaginary superhero named Rem Lezar. However, when the boredom and monotony of the real world becomes too much, the kids’ desire for illusion becomes so great the Rem Lezar becomes real and takes them on a journey through the city.

Let me present a scenario for you: You’re walking through Manhattan when you notice this strange man with blue hair, wearing a tooty fruity cape and costume made of spandex. He is holding hands with a little boy and girl who don’t seem related to him in even the slightest as they skip merrily. You see him occasionally glance down both lovingly and miserly at his playmates. This kind of questionable strangeness punctuates almost every scene of this film. I’m willing to accept that such imagery is probably much more upsetting today than it was back then, but I have to believe more than a few parents weren’t comfortable seeing Zack and Ashlee falling asleep in some blue-haired stranger’s lap. Or the part of the movie where Ashlee can’t sleep so Rem Lezar goes into her room and stands watch over her; literally watching her sleep. 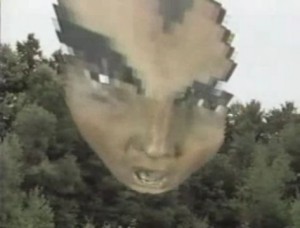 Did I mention this movie is a musical? That is to say that there is music in this movie and by “music,” I mean vaguely melodic sounds emanate from an invisible Casio keyboard while embarrassed actors move like string marionettes.

As horrible as this movie is, Creating Rem Lezar does manage to entertain for entirely the wrong reasons. I often found myself asking the questions that were never asked like why two complete strangers, these two children, would have visions of the same superhero if he was fake? What kind of Lovecraftian presence on the edge of existence was joining their fates? Perhaps as the result of a sin conceived by both families centuries ago? I highly doubt the depth or relevance of my ramblings, but I do remember what it was like to be the eight-year old in elementary school who didn’t give a damn about math or Ernest Hemingway, and if you’ve ever been yelled at for having an imagination like it was a bad thing, then this movie might turn your head for a fleeting second. Other than that, you really should see this movie. Not because of some hidden gem of storytelling (which doesn’t exist) but because it is a funny movie; ironically funny, but funny still. 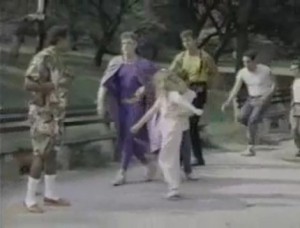