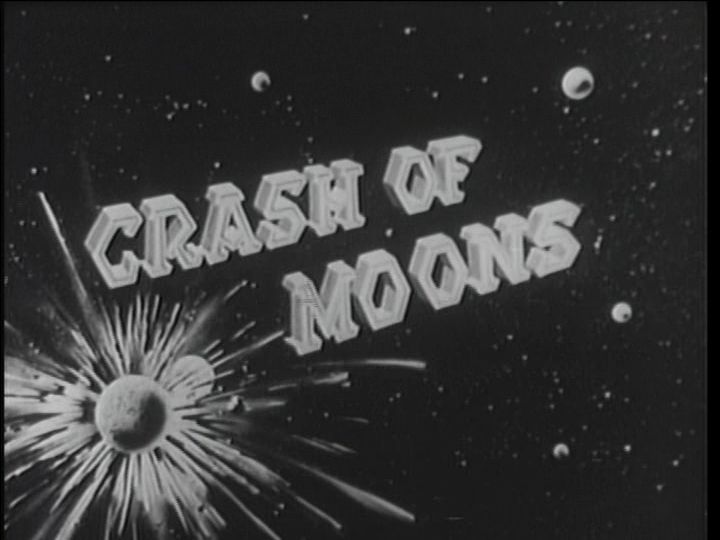 Crash of Moons is one of those films from the 50’s that is so cheesy that the only way it manages to really stand the test of time is by support from real nostalgia buffs and self-hating mongrels like myself. Set in the “not so distant future” the film follows the exploits of Rocky Jones, all-American hero, and his lovable sidekick, Winky (shut up).

One thing that always makes me laugh about these films is when they are set in the “not so distant future,” I mean what does that even mean? “Oh, in, like, the 60’s we’ll have space stations and dress like we’re going to a Renaissance Fair in space?” ‘Fraid not, mi amigos! We, humanity, are still very much[break] Earthbound with our feet in our regular shoes on the ground. 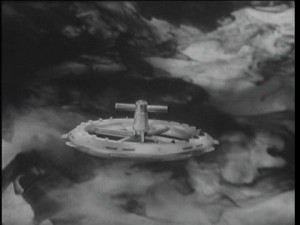 The story is simple enough: Rocky Jones and Winky must prevent twin moons (the Gypsy Moons) from crashing into Ophiucius, a planet ruled by an evil empress, Cleolanta. The only problem is that Cleolanta refuses to evacuate her people and would rather destroy the offending moons and their inhabitants. Together with the help of some quirky allies, Rocky and Winky have to stop the empress from destroying the moons and convince her to reconsider her stubborn stance against the United Worlds.

About midway through the film it became abundantly clear to me that the writers didn’t know the difference between planets, moons, or even stars. Rocky would say that they were going to investigate a constellation and in the next scene, they’d be on a desolate planet. As crazy as that might sound, the only justification I could muster for this is that this movie was originally aimed towards children and they probably didn’t want to get into it. In fact, Crash of Moons isn’t even a theatrical movie, it’s, in fact, a serial consisting of 3 30-minute episodes in the Rocky Jones, Space Ranger television show. This revelation also explains how all the character know each other or have histories and why you, if you’re like me, would have absolutely no way of knowing this having not been around when the show was on TV. 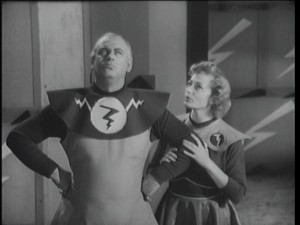 There were quite a few strong female roles for a film/serial of this decade and that was very refreshing to see. Cleolanta, the emotionally immature yet ruthless empress, bows to no one and is stoic in her resolve. Trinka, the wife of a dignitary in Cleolanta’s cabinet, isn’t afraid to pull a gun on her husband and the empress to prevent their madness. I’m not saying these roles were super progressive, but coming from a long history of overhearing my dad watching any and every movie on AMC, it was nice to see female characters that weren’t just receptionists or put in the story to shoot the guy in the back. 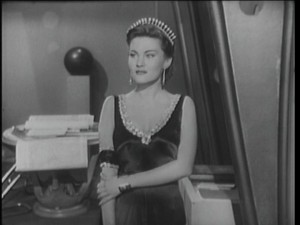 The only real fault with this film, and it’s a rather big one, is that the story is “stupid.” It is. It’s like somebody made a 70-minute film out of a comic strip that came with their bubblegum, and as much as I can allow these things as concessions to appreciate the hard work of the time, I understand full well why this is a heavily-mocked film. If you have a genuine appreciation for film throughout the ages and are willing to understand the context and the time of some of these older classics, then I think you might really enjoy this. If you’re the sort who “doesn’t like black and white films” then stay away from this. You will be bored. You will spend more time looking for the strings on the little spaceships instead of really absorbing the atmosphere and the time in which this film was released.