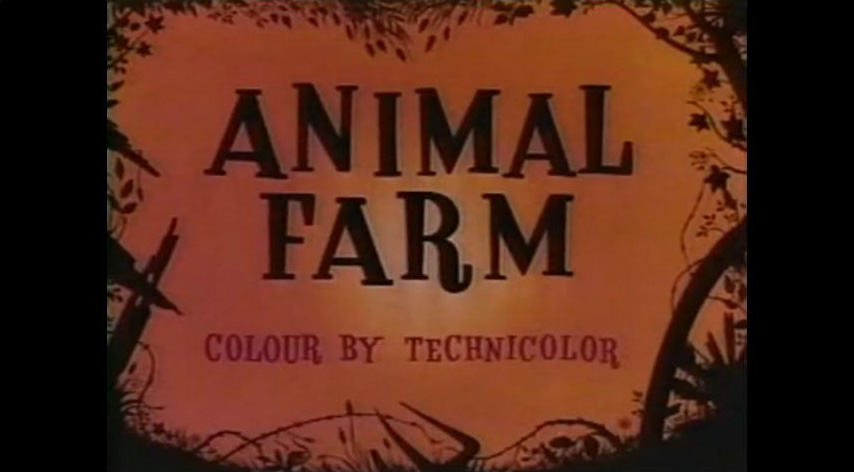 I was surprised when I found out there was a cartoon adaption to one of George Orwell’s most celebrated novels. Not because I didn’t think it deserved the honor of being immortalized through animation, but simply because I wasn’t sure kids were going to be able to digest this kind of story. The novel was harsh and unapologetic in its depiction of a dystopian society. In the end, there was no happy ending, just a hard lesson learned…

In this particular version of the story, the creators sort of pulled a classic bait and switch. If you were not familiar with the story or the title (in which case, welcome to life, the year is 2009), for all you knew, you were buying a classic animated feature with goofy-talking animals and pigs wearing people clothes. However, what you ended up watching was far from tame. No, what you ended up watching was how an ideal society like “everyone is equal” could go so horribly wrong when implemented by the wrong kinds of people (in this case, pigs). 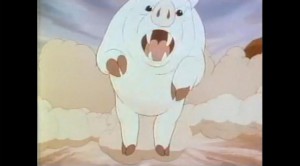 The story is simple enough to grasp in the beginning: a farmer, down on his luck, has tended to his drinks more than the land. As a result, he severely mistreats his animals to the point where he is seen as a tyrant and a danger to the lives of all the farm animals. Eventually, the animals form a revolution, but they are warned by the eldest of animals (a prized boar) that while overthrowing their tyrant, they must take care not to become tyrants themselves. With the revolution a success, the farm animals form their own ideal society operating under the most basic fundamental: “All animals are equal.” Unfortunately, this is where the animals make their first mistake. Much like the idea of Communism, the idea of everyone being equal and being allowed to have the same things is much nobler than the actual application. In the end, the animals become their own worst enemies and, where one tyrant once stood, now many occupy his place. It’s interesting to note that the CIA was heavily involved with obtaining the rights for this film, as well as privately funding it. It was hoped that Animal Farm would serve as an example of anti-communism propaganda. 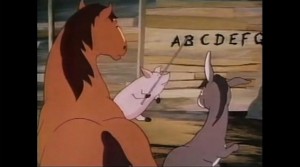 The animation style is very well-drawn for the time of its conception. Animals are bestowed with rubbery, stretchy, and cartoonish qualities that obscure the darker nature of the story. Though it seems only the pigs have the ability to speak English, the other farm animals are quite vocal in their expressions and body language. If anything, the idiosyncrasies between the dark tone of the story and the endearing quality of the characters only serves to drive the point home further. You grow attached to these ignorant brutes and, as you see the world through their eyes, you realize just how unfair life can be. Despite the story possessing many good and benevolent protagonists, not all of them live to see the end. 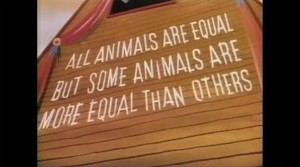 The fact that this particular adaption of Animal Farm looks like a kids cartoon can be unsettling and even confusing for some people. However, I think that this presentation also helps in managing to elicit an emotional response and investment from the viewer. While you learn what it means to live in a dystopian society, the colorful and animated characters pull you into their world. Those who are overwhelmingly faithful to the book, will no doubt be offended by the changes made to the ending, but as far as an adaption and a retelling, I feel that this film goes above and beyond the call of duty in expressing Orwell’s warning of how a pristine paradise can quickly become a dystopian society.