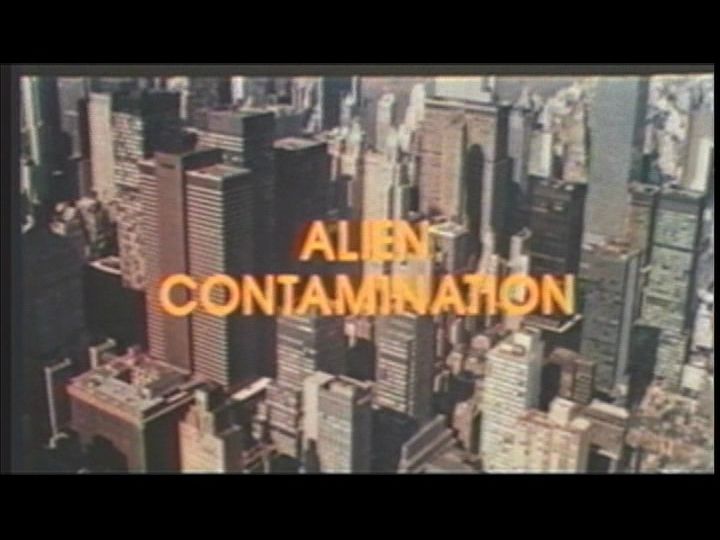 So, in 1979 this guy named Ridley Scott came out with this movie called Alien. A claustrophobic, frightening and surreal tour-de-force, Alien was a one of a kind film that redefined the scifi/monster movie genre. Spawning numerous sequels, spin-offs, literature, and even video games, the Alien franchise is still very much alive and well. However, as with all great things, success shined down on the film casting a long, black shadow of horrible imitators. You may recall a fairly recent review of [Inseminoid] that LesserGood had the pleasure of talking about. That film was notable for taking all the vaguely erotic and scary child-birth themes from Alien and leaving all the character dynamics, coherent plot and setting at the door. Today, I get to talk to you about Alien Contamination, a film whose only fault is some stilted writing and the utter boredom experienced in the first half. 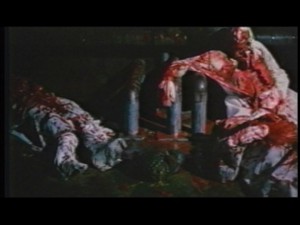 The story of Alien Contamination follows a regular, average Brooklyn Police [break]Officer (Aris) exploring a tanker that’s run aground. Inside the tanker, Aris and a couple of his partners discover strange, football shaped eggs (similar to the pods in Alien). Unfortunately, before Aris has a chance to assess the situation, his buddies are already manhandling one of these pods when it decides to explode, consequently exploding the chests and bodies of the two police officers. Aris is later apprehended by a secret government task force where their investigation of these pods has them enlisting the aid of a retired astronaut played by Ian McCulloch.

For what it’s worth, the story in Alien Contamination is far more coherent in terms of an Alien rip-off than Inseminoid. The only thing it seems to take from Alien is the gruesome imagery of a person’s abdominal cavity exploding, and even then the nature of this event is altered changing the meaning completely (instead of forced childbirth it’s an alien pathogen that spreads by bursting its host). Some of the characters are so over-the-top cheesy that they are almost endearing creating some amazingly likable characters. The real problem with this film is the first 40 or so minutes of it. When nothing happens other than the main characters having discussions ABOUT discussions you start to worry about the next 40 minutes. It’s literally when Ian McCulloch first shows up that the film starts to really take off and get interesting. A logical story arc is developed, and interesting character twists come into play (alliances are forged, people thought to be long dead are very much alive, etc). 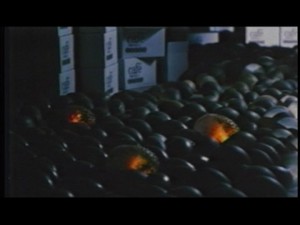 Another thing rather noteworthy about this film is the special effects. There are two versions of this film: an uncut version and a heavily edited version. While both have their fair share of gore, the uncut version has at least 10 minutes of missing footage which displays ever gory little detail of exploding chests. Apparently, the special effects in the original version of this film were so bad that this film was actually a “video nasty.” If you don’t know what that means, a “video nasty” was a classification given to a film that was heavily criticized for obscene amounts of violence and/or other lovely elements not suitable for younger audiences.

One thing that I found tremendously refreshing about Alien Contamination was the ending. I’m not being cute, what I’m saying is that unlike 99.9% of the movies I’m forced to sit through with their total “f#$k you” endings, this one actually ends well. There are no real loose ends left for the viewer to worry about and the main antagonist of the story is dealt with. No illogical twist where the monster survives the “battle to end all battles” just to stab the protagonist in the back and nothing to make you feel like all the effort in the world of the movie was for nothing. 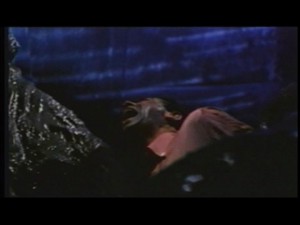 I could pad this review out several pages talking about the horrible acting which seems to be indicative of the times, stiff writing, the continuity errors, the lack of any conceivable research regarding law enforcement or procedure, but the fact of the matter is that this movie’s biggest fault is the 40 minute hump in the beginning. You manage to get past that and the film is surprisingly entertaining to sit through in a bad-good, sort of way.
Next Post
Previous Post
Next Post
Previous Post