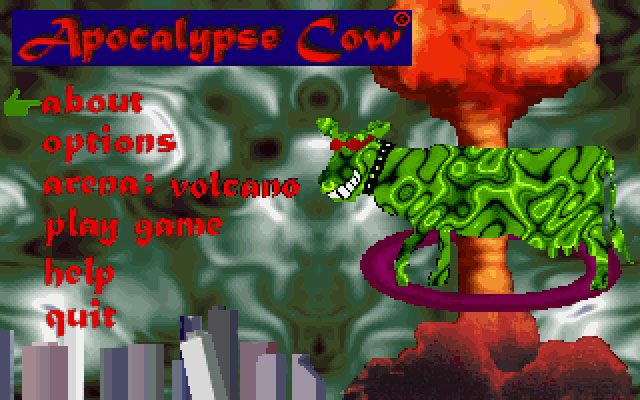 An odd game if I ever saw one. I remember playing this well into the Windows era, but apparently it’s still a DOS game. Which is fine, just thought it was a bit newer. 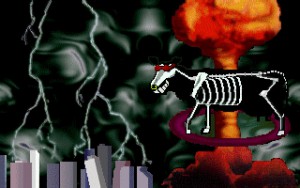 Like most tank war games, you play either in pairs or against the computer. It isn’t turn based, so each player tries to hog as much of the computer keyboard as possible while lining up and trying to successfully land shots. This leads to the possibility of actually punching the person next to you once you get frustrated enough trying to do it digitally. 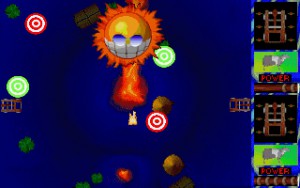 A power bar cycles up and down, which gives you thrust. You can angle and drive your catapult around to get a better shot since there are only five levels of power and getting an exact hit isn’t precise. Also scattered around are targets that either provide more enemies like giant gerbils or blimps that get in your way, or upgrade your cows to missile carrying or ones made from glass.

The game of course doesn’t have an ounce of seriousness as expected. Cows fly around and splat all over. Plus if you’re lucky enough to have two cows collide, they fly to the heavens and have a quick boxing match. In street fighter style, they fight to the finish, and decide which one will end up getting to fall back to Earth and die. So in essence, the loser is the real winner. 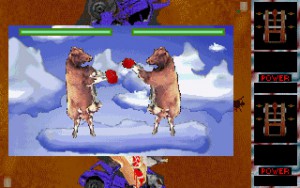 It’s a cute novelty game, but games like Tank Wars and Scorched Earth will hold your attention a lot longer.