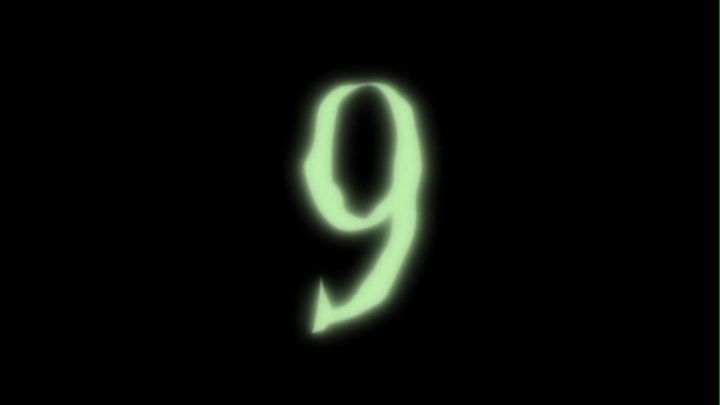 If you’re like me, you knew about the theatrical motion picture “9” produced by Tim Burton before you ever even heard about the animated short of the same name by Shane Acker. The short was developed and released as a school project in 2005. Garnering much respect, it caught the eye of one, Tim Burton, and 9 took off from there to be released as a motion picture in 2009. I recently had the chance to watch both the short and the motion picture. While I feel both films were done well, the short is the one I’ll be reviewing today.

Our story starts with the titular character “9,” a sentient doll, eking out a meager existence on a post-apocalyptic[break] Earth. There are no humans in this film and nothing to indicate what destroyed them save for the obvious references to warfare. Rusted cars and World War II era helmets litter shell-shocked villas. The setting works. Instead of being bombarded with expository flashbacks or backstory, subtle hints to the nature of the world are all that are offered. This forces the audience to form their own conclusions about the setting without stopping any of the action. 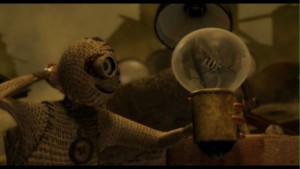 While the short does involve an overall plot involving a fight against a monster, there is little to no real overt narrative as none of the characters speak. You don’t know anything about 9 other than the fact that this monster, a mechanized creature incorporating a canine skull for its head, is tracking him and has stolen the souls of other doll-people like him. What you do notice is a sense of desolation in the environment and a profound sense of loneliness in the characters. What 9 lacks in dialogue, he more than makes up for in facial expressions and touch. 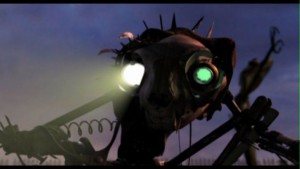 The animation is charming and clever, taking commonplace shapes and objects and finding ways to really make them emote. As I said before, the pacing and technique of the animation allows us to really identify with a character who otherwise has no real voice.

If you’ve seen the theatrical version, there isn’t anything in the short that you haven’t already seen. Compared to the short, the theatrical version is basically an extended retelling. While you do get more backstory and character development in the full-length movie, I feel that the film also suffers from being too expository. Action tends to screech to a halt whenever 9 learns of his history and while the history in the story is certainly intriguing, it isn’t left to the viewers imagination or interpretation. Both versions of 9 are fine films, but they both succeed for different reasons. The theatrical version managed to be an entertaining adventure story, while the short really drew the audience in with subtlety and ambiance. Proof that a budget of $30,000,000 doesn’t necessarily mean a better movie (but I’m sure it helps). 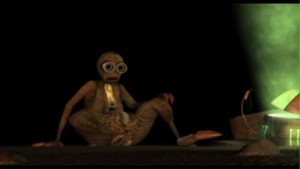