Stumbling on a Spider Beetle 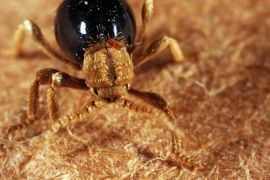 A colleague of mine who knows I’m into bug photography called me one day since he found some bugs in the office. He figured they were assassin bugs, and that’s not out of the ordinary since members of the True Bug family tend to overwinter inside. I made a point to bring my camera into work since opportunities to photograph any sort of wildlife in January tend to be non-existent.

I head over the next day, and we trek to the top floor of one of the old New mansions. Probably not one you’ve heard of, but there’s so many that even the run of the mill buildings around here are enormous. Heck, I work in what used to be a stable, and it’s still out of the financial reach of most mere mortals.

Anyhow, up in the rooms designed for people from the 1800’s, with six foot ceilings and doors that require ducking, we head to one of the drafty windows, where I can clearly get a line of sight to the outside when looking at the right angle through some of the wall gaps. There’s a few bug carcasses, called frass from this point on, but one that’s alive. 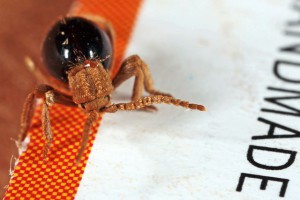 I’m wondering if they’re leaf bugs rather than assassin bugs, since they tend to look a lot alike, and really only differ in diet. After getting one into a cup, it flips on it’s back, allowing for a photo of it’s underside. With the full body being more or less an inch, it had a long stabby proboscis measuring about 3/4″. It was certainly notable, and we managed to get a few detailed shots of it. The interesting thing was the discovery of a second proboscis, this one being darker and not jointed like another appendage. After taking more increasingly magnified shots, I also noticed another tube coming out of this second one, almost like it was a sheath.

The frass bugs did help, since they don’t move all that much and allowed for the really details shots. I was able to get a few head shots of the living one, but trying to catch the correct focus plain on a moving insect, is rather difficult. 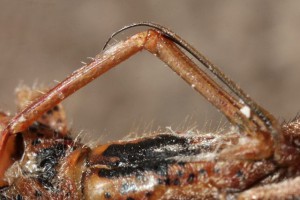 But I’m not here to talk about Assassin bugs, or leaf bugs, but rather something we found in the light fixture. Since I was there, it made sense to see what else was lurking around. Lights a good places to find bugs, despite them mostly being frass, as incandescent bulbs are analogous to seeing the light before you die. It’s just quite literal in a bug’s world.

We did find quite a few bodies, mainly of more bugs and some hornets since those are everywhere in the ceilings here. The light in my office must have a few dozen bumblebees and hornets in it. One thing was alive though, and it’s presence made sense once I started some research. The same would go for it’s namesake. 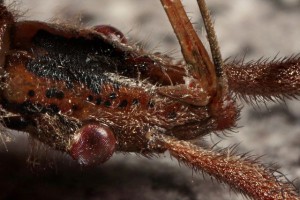 Above is what I saw once I increased the magnification, but at first, I figured it was just a really small spider. It’s not uncommon to find the tiny cobweb ones pretty much everywhere, so I took an initial shot from above for size reference. It came out to under 5mm, which puts it in a class of bugs that typically excludes what it actually was.

Slowly I zoomed in, and realized that I was looking at a beetle. Not one that I had ever seen before, and aside from some of the smaller examples from the Lady Beetle group, I never figured one to be so small. I was genuinely at a loss for identification, and wasn’t really sure where to start. Bugguide is the natural option, and I spent the next hour or so, hunting through all the beetle groups, hoping to find on that matches. I felt I was close a few times, but eventually swallowed my pride and posted the images to the ID Request page.

It didn’t take long before someone knew what it was, at least to Genus level. It was a Spider beetle at the very least, but there were two species. The informational pages did have some helpful hints as to how you would break it down further, but I wasn’t 100% sure, as one of the species didn’t have the clarity to really see the difference between the two.

I was fortunate that not even an hour later, expert V Belov chimed in and got it to species for me. He specializes in tiny AND obscure species, so this fit the bill nicely. As a bonus, I found out that these beetles eat dry bug matter, so it made sense that it was the only living thing in the light fixture.

On a side note, they have been found to be indoor pests, since they do mainly eat discarded material, so if that sort of stuff is around, they will have a plentiful food source.

Side note #2, is that the original bugs weren’t Assassins. They were leaf-footed plant bugs. Ah well, least some intuition was correct.