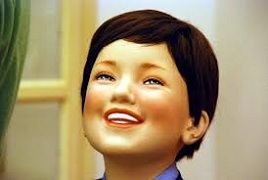 Vermilion Pleasure Night is a Japanese comedy variety show that primarily focuses on parodying popular Japanese shows and American sitcoms. You could probably get away with likening it to an episode of Tim and Eric, except for the fact that the episodes are longer, which can be a plus and a minus.

Tim and Eric, for the most part, got away with their brand of humor because of the brevity of it. Even if a joke tanks or is so weird it’s actually offensive, they cut so abruptly that you’re actually left wondering if you actually saw what you just saw.

Vermilion doesn’t quite know when to quit sometimes and, when a joke falls flat, you’re there for the long haul.

Of course, the show isn’t consistently bad. There are quite a few humorous and recurring sketches that really nail it in terms of the absurdity. One sketch in particular, The Fuccon (yes, that’s a hard c) Family revolves around the misadventures of a stereotypical, Caucasian American family (played by static mannequins) and pretty much nails everything wrong with great American sitcom. 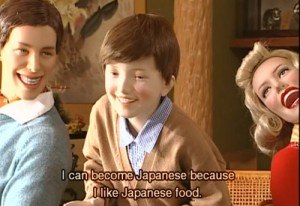 There are lots of other great ones too, but I thought the Fuccons were worth mentioning since they were popular enough to spin-off into their own series.

It’s clear that the point of the show is to shock more conservative Japanese viewers, but those of you raised on the not-too modest offerings of the States probably won’t find too much to knock your socks off. Within a cultural context, it’s a fun little diversion with some clever jokes and observations.

Good, but not great.