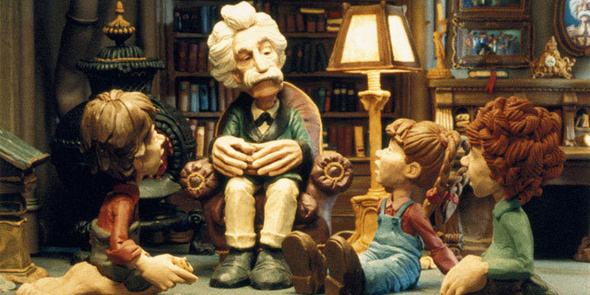 Will Vinton, who many of you might remember for the California Raisins, is kind of a god to Claymation. He is right up there with Art Clokey (Gumby), Henry Selick (Coraline) and Nick Park (Wallace & Gromit). And just like all the other greats, there is always this distinctly Vinton look to all the things he touches.

His characters are like soft, malleable caricatures with exaggerated features. It’s like if someone took those wacky drawings you can have done of yourself at a carnival and made them out of clay. There’s also this almost unprecedented level of detail in his creations and his involvement has never been more apparent than in The Adventures of Mark Twain.

This film came out on the same year that I was born so I’m not necessarily surprised that I missed the initial release. It does, however, baffle me that it took a random stroll through YouTube to find out it even existed.

It often goes by a number of different names on YouTube but it is pretty much the most iconic part of the film…this kid’s film. And, really, that’s what I find so remarkable about the movie, overall.

The Adventures of Mark Twain, aside from being a whimsical journey through some selected works of Twain, is at its very core an earnest attempt at explaining the world to younger viewers. What some might call harsh realities (human nature, love lost, death, the afterlife) Will masterfully blends into a sometimes confusing but ultimately enjoyable film. 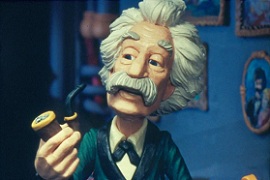 There are some great Twainisms too for anyone looking for something snarky and profound to post as a Facebook status as well. And even if you don’t quite get the story or understand where it’s going or even appreciate the ending, there’s still plenty of eye candy with all the fluid and almost lifelike Claymation going on in this 86 minute romp.
Next Post
Previous Post
Next Post
Previous Post