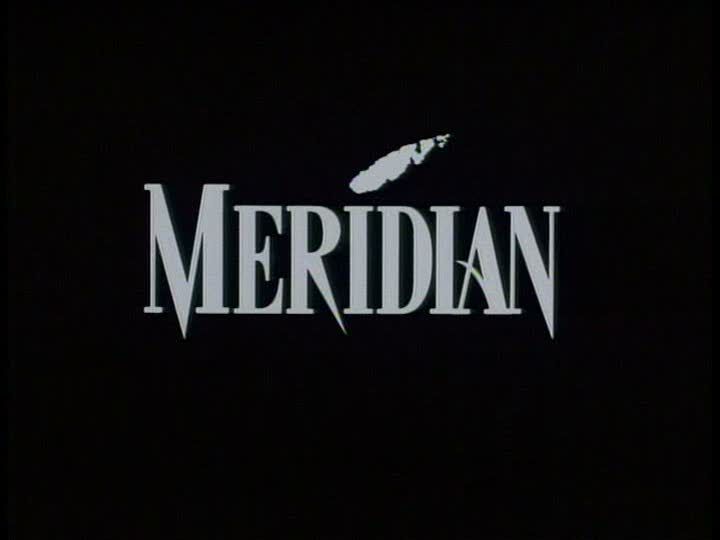 Slowly we move through the Full Moon offerings. I say slowly since I never update anymore, and we’ll probably reach Evil Bong 3 shortly before my death. Maybe Bride of Head of the Family will even be released by then. Miracles may happen, but somehow I doubt that Jacqueline Lovell will be back. [break]

So being an early entry still, we’re treated to lavish locations, relatively known actors/actresses, and horrors that aren’t too far fetched. Sadly the horrors aren’t really good either, as this was seemingly meant to be more of a sensual romance piece akin to Embrace of the Vampire more-so than a frightening one. No points deducted since this the how ALL of the Full Moon movies end up, although most don’t try, they just sort of end up there. 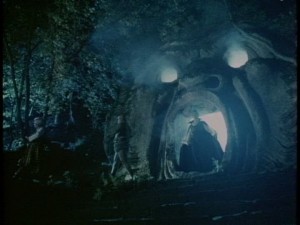 In any case, Catherine (not Meridian, we’ll never find out what that references) travels to Italy with her friend the painting restorer to spend some post-school time in the country. This gives her the chance to see her father’s castle, which she hasn’t visited since she was a child. The old house keeper is still there to provide exposition and flesh out the dialogue a bit though.

So with school out and the friend not caring about her emergency job of scraping the top layer of paint of a painting in order to reveal the one beneath it, they of course go see the local circus sideshow. Naturally the sideshow is the entire act, but that’s all anyone cares about anyway. So with midgets and freaks out of the way, the magician comes out and calls for a volunteer and chooses the friend. The trick doesn’t leave much of an impression, as the magician just keeps staring mysteriously at Catherine. 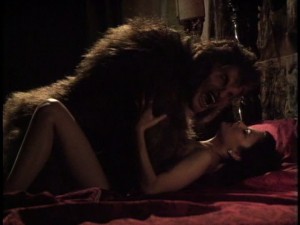 After the show, the two head backstage where they are welcomed once they find out Catherine is related to the owners of the castle. They invite themselves over to a feast, where Catherine and her friend are drugged and date raped all night. It all begins with a midget laughing and breaking a mirror, and it ends with a werewolf beast howling. Somewhere in the middle is the main reason why I’m sure most people bothered to watch the movie.

The next day as usually happens I guess, Catherine wonders if she was drugged, and her friend replies ‘yeah I guess, sorry, I have to get to work on time though’. So that’s somewhat hard to believe, but the story moves on. So while her friend is off scraping paint off a painting and thus providing exposition via the underlying scene, Catherine wanders off into the gardens and stumbles upon the man she invited over the previous night. As they talk, he confirms the suspicions she had. To Sherilyn Fenn’s credit, she does a very good job acting like her stomach dropped at the news. Of course the bar was set pretty low, as not running off to work was an acceptable alternative. 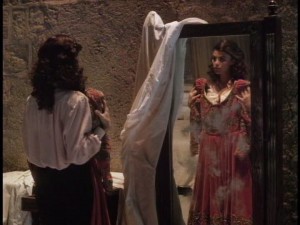 Well she doesn’t want to see him ever again. I’d maybe go to the authorities, but perhaps Europe has liberated to the point where date-rape is just a lifestyle choice that we need to keep an open mind about. Agree to disagree so to speak.

Not sure where I’m going with this, as a werewolf was actually the one who did the deed, and soon she’ll meet him and have different opinions as she falls in love. You see the evil man is a twin, and the other half turns into a beast. However they are linked to a degree and when one is hurt, the other inflicts the same pain. This plays a role later, as it will be difficult to defeat the evil one without hurting the one she has feelings for. All the while, Catherine finds out that that a girl died in the castle before her by their hands. So the plot goes on and on and on and becomes borderline over-dramatic. I mean this is the selling point for an atmospheric movie like this, but there’s a lot of wandering around and looking at things before the finale kicks off. Such are the low-budget ‘thrillers’ of the time. 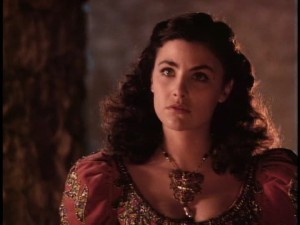 I’m always good at remembering how movies are set up, but draw blanks when I have to recall how they end. Just as well in order to avoid spoilers, but Catherine sees ghosts, the good twin turns into a werewolf again, and there’s some sort of resolution for better or worse.

The mood of the movie is certainly well done. Even if it’s more for show and doesn’t affect the plot as much, I like seeing movies set in a rich environment that draws you in. It won’t drive the movie, but helps to overlook any other shortcomings. That and I’m simple and will enjoy movies that are visually appealing.

I’d also like to thank Ms. Fenn for not being a platinum blonde in a movie. That’s just annoying.