I have a strong dislike for this movie, and it has nothing to do with the actual plot or really anything else. For some reason I just can’t seem to tie the title with the actual movie.

Case in point: I first saw this either on sci-fi or some other cable channel many years ago, probably when it first came out. With moderate indifference, I don’t think I even finished it. Then later on, I believe I rented it through netflix, and soon realized that I had already sort of watched it. Then I get it on DVD and see the same thing. As a final insult I was continuing with these Full Moon reviews, and couldn’t remember what this title was about, but sure enough I see that same bar on the bayou opening shot that instantly reminds me that I’ve seen this at least four times but still couldn’t make the connection. I guess it needed one last kick. I’d like to say that after reviewing it now, I won’t have this happen again, but I’m sure that I’ll trip over the same trap in the future, just as I have many times before. [break] 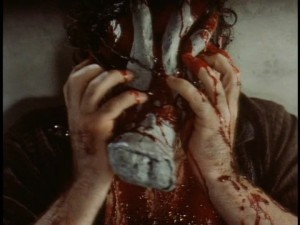 This is another early Full Moon release, and thus like Shadowzone, takes itself somewhat seriously. There’s still a bit of silliness, but the actors were really trying to play it straight. The movie centers around a bayou brothel of celebrity look-a-likes (or as they claim, resurrections), and the estate of a recently passed man. The brothel gives us some initial impressions of creepiness due to some shadowy masked figures lurking around, and plenty of tricks on the eyes. The estate portion of the plot centers around the son who comes to inherit the property, but gets sucked into the southern voodoo.

I’m probably showing my ignorance by calling it voodoo, but it’s a dark art that centers around bringing the dead back to life, so call it what you will. The son finds his father’s journal and see that his last wish was to be resurrected via a ritual. The estate also houses a caretaker and his 30-to-look underage daughter. They really don’t play much into the plot until the end, but provide awkward scenes of the son chasing a ghost but ending up in the bathroom while she’s taking a shower. 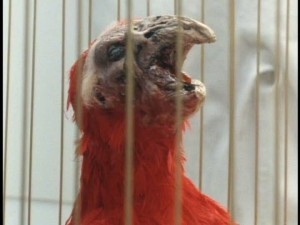 Amidst all this, we jump back to the brothel where random people are killed. No here’s where it does get somewhat interesting briefly. There’s a stone hand that’s embedded into a wall. But from time to time, it detaches and flies around the corridors to rip people’s faces off. The special effects are especially good in these regards, as the real world makeup really looks good and dare I say gooey.

Then we move back to the resurrection ritual and little more happens. The father comes back at some point, some random people wander around, and a bird’s face falls off. Now I just hope to not have to see this again, at least unless I specifically want to.