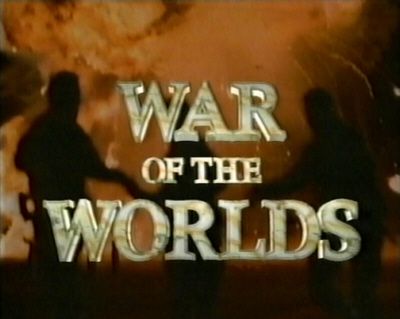 Picking up after the events of the 1950’s film, the War of the Worlds television series found a small research team battling the dark agenda of the Martians that survived the first war. Now, anyone who has seen the original film will undoubtedly have some questions. For starters, all the Martians were wiped out by “alien” disease, how could there be survivors? Furthermore, why does the setting (1988) look remarkably similar to the way we knew it…wasn’t Earth ravaged in the war? I have one word: “retcon.” 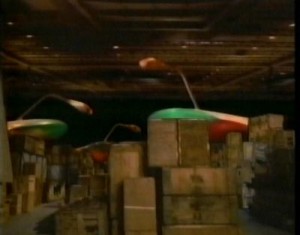 The premise of the show is simple: the Martians never really died from foreign disease, they were simply put to sleep. Instead of researching them and their technology, the powers that be figured the best idea was to simply store the aliens in toxic waste drums out in the middle of some desert. This plan lasted 35 glorious years until a terrorist group took control of the storage facility and inadvertently reanimated the Martians. From there, the Martians used human bodies as their vessels and eventually discovered their flying death machines and technology which was gathering dust in some[break] bunker. The long short of it is that every week, the Martians would launch some guerrilla attack against humanity and the only thing standing in their way was a rag-tag group of four. 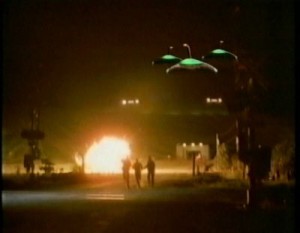 Each episode usually dealt with Martians hatching some new and sinister plot to usurp the Earth from under humanity’s complacent little noses. These nefarious plans ranged from stealing the bodies of a prison hockey team in order to ride the prison bus and performing a pop song that could hypnotize people. When I watch the show now, I feel this very disturbing sense of dread; that some insane person is telling me this story. As far as the “war of the worlds” it never happened in the context of the television show. People in the show literally move through their 1988 lifestyles with absolutely no recollection or mention of the event where Earth was almost conquered. The best the writers could come up with was “collective, self-induced amnesia.” The war was so horrible that all of humanity buried the painful past.

If you manage to see past the horribly shoddy retconning that runs rampant in the show, there’s actually some neat stuff to see. Did I mention how violent this show was? Literally, every episode involved some dude’s skull getting smashed by a Martian’s hand, or a dead Martian dissolving into a flesh-colored puddle. The Martians, who could somehow compress their bodies to fit into a human body, would often times use their third arm to burst through the chest of their vessel and strangle and/or mutilate their target. 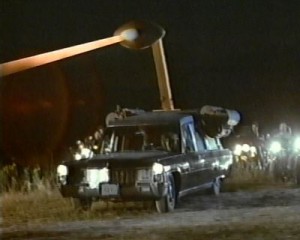 As much as I make fun of this show for the horrible writing, there really wasn’t anything else like it at the time. This was the kind of show that made me scared to go outside because these Martians could look exactly like people you walk by all the time. And while the overall premise and story for each episode was ludicrous, the actors and the characters were surprisingly interesting and likable. With all the recent sci-fi remakes (Battlestar Galactica and V), who knows, maybe we’ll see the proper return of War of the Worlds.