Home / Movies / The Unnamable II: The Statement of Randolph Carter (1993)

The Unnamable II: The Statement of Randolph Carter (1993) 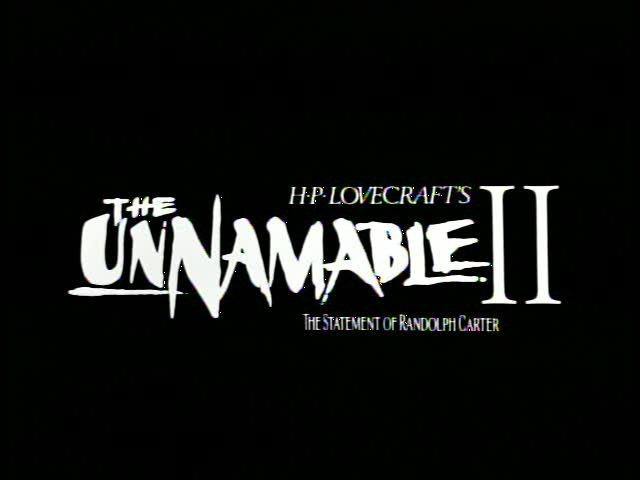 I’ve always wondered how difficult it would be to make an adaptation to a work by H.P. Lovecraft. Surely, it would be a horror film and one would hope that a cerebral, psychological vibe would be present. How does one convey the psychological torment endured by Lovecraft’s unfortunate protagonists? Surreal imagery, perhaps, or intriguing sound design and pacing to further facilitate the illusion of insanity. Often times, many film adaptations of Lovecraft’s work fall within the realm of typical horror; where the man with the chainsaw in the closet is replaced by a fish-man in the closet. These adaptations fall short of what the source material intends, but sometimes you deviate for the sake of entertainment, which can have disastrous results. 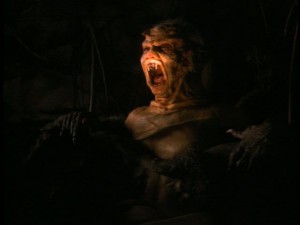 The Unnamable II: The Statement of Randolph Carter is the sequel to The Unnamable, a film which attempted to adapt the short story of the same name by Lovecraft. In it, we see the return of Randolph Carter (Mark Kinsey Stephenson) and his friend Howard (Charles Klausmeyer), survivors from their first encounter with the titular ‘Unnamable.’ Aside from the mysterious renaming of Klausmeyer’s character (Howard Damon to Eliot Damon Howard), The Unnamable II deals with much of the same themes from the first, focusing on the battle between ordinary everyman characters and malevolent spiritual forces existing on the periphery of our world. 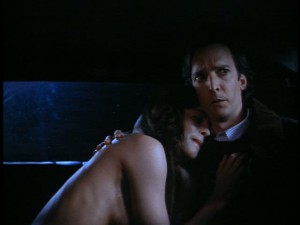 I’m always fascinated by the interpretations people come up with for Lovecraftian Horrors. While there is generally an accepted canon for what they should look like, many different people often develop many different ideas for how these monstrosities would appear. This is, no doubt, on account of the fact that Lovecraft often describes his ‘monsters’ with nothing more than vague abstractions. Terms like ‘inconceivable horror’ and ‘crawling chaos’ are usually used when describing the things that are too horrific for mankind to comprehend. The idea is that these ‘monsters,’ which are more like forces of nature in some instances, are so beyond human understanding that even his protagonists have a hard time talking about them. This is an intriguing concept that forces the reader to dive deep into their own psyche and give form to these nightmares.

As an adaptation, there are a couple things that were changed for the sake of the film. For starters, the Unnamable is characterized as a female demon with cloven hooves and horns. In the original story, the protagonists never really got a good look at the beast, but their injuries were hoof-prints in their backs and gouges from horns. However, their description of the beast was that it was “- a gelatin – a slime – yet it had shapes.” This seems like it might be a difficult deviation. On one hand you want to remain faithful to Lovecraft’s work, especially if you’re including his name in the title card, but on the other hand, will horror aficionados take a shrieking, amorphous blob seriously? Probably not in early 1990. While the interpretation of the Unnamable might be too literal for what Lovecraft fans were expecting, the monster stands well enough on its own, especially since it has to serve as a tangible force for our heroes to face. This isn’t the only deviation this film series takes. The time setting is the late 20th century as opposed to the early, and while the first film did take place in a “haunted” house (like the short story) the sequel focuses on a university setting. There is also more of a traditional demon-possession slant regarding the ‘Unnamable,’ and while it has existed for centuries, it’s an easily understood presence. 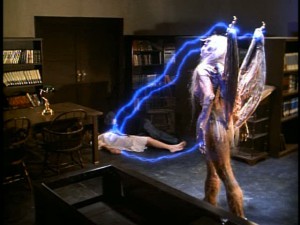 In the end, The Unnamable II serves as an entertaining horror film with the occasional cheap scare and plenty of gore. The film knows when to laugh at itself and both Carter and Howard are amusingly calm despite what they are facing, having survived their initial encounter with the Unnamable. Where the film deviates from the story, it does for the purpose of entertainment and doing so proves successful. Much of the Cthulhu Mythos are present and used to great effect to further facilitate the kind of atmosphere one would imagine in a Lovecraft work. While many diehard fans will be unhappy with the handling of the Unnamable, it shouldn’t be written off as a bad film. Lovecraft’s literary world can be incredibly daunting to the uninitiated and The Unnamable II manages to reach out to the average moviegoer, with plenty of Lovecraft Lore for those willing to search for it.