I was pretty sure I was going to hate this going in, but I found it wasn’t all that bad. Originally I was going to compare Rise of the Scarecrows and this movie, but then I had to actually watch both, so things might be altered a bit.

However the core point still stands as ‘Scarecrows’ used its non-budget to make a decent movie, while ‘Lake’ just ended up farting a lot. I guess that fits the name, but still, it’s not really funny. Many things went so wrong here. You expect the acting to be pretty bad, but each person plays up their current stereotype to the point of absurdity. 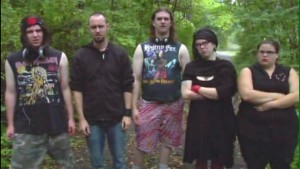 We have a Lucille Ball imitator who constantly wants to be in a movie, but is played by a heavily tattooed girl who talks out of the side of her mouth. There’s a Tony Danza wannabe from New Jersey, some guy named Snake who only gets a line every 10 minutes, a huge goth girl, and then the leader of the group who is just an honest to goodness bad actor. Outside the core group, there’s a redneck hillbilly, some assasin girl and Caspian the keeper of the cottage by the lake. I’ll give credit when due, Caspian was the only one who could really stay in character, or at least give you the impression that he wasn’t some kid playing a part. His mannerisms were so bizarre, it was hard to fault. The Tony Danza guy played his bit well too at times. 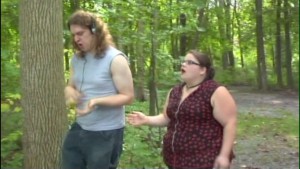 The problems are many fold. First is the use of stupid facial expressions. Note to filmmakers: avoid stupid faces, and your work will improve three fold at least. For some reason many of the characters are contorting their faces to make some dumb look, or otherwise are farting to express their disdain for someone else. 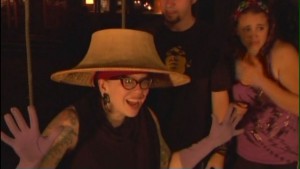 Next up, the scatalogical humor just doesn’t work. I mean the masterpiece that was Monsturd did it well, and it never got old, but here is just seems thrown in for cheap laughs. Other than farting and talking about poo, most of the humor is of a raunchy type and falls pretty flat. I mean including a reference to Toblerone is commendable, but then tying that into sodomy, and you’ve lost me.

Speaking of obscure references, they run into tricky ground. It was evident that the crew was trying to show off their knowledge of whatever subculture they were aiming for, whether it be music or horror movies. It’s just under the radar, but not much different than the way Hot Topic thinks it’s underground. The amount of name dropping rivals that of even ‘The Dead Hate the Living’, so ultimately they end up just immitating other works rather than expanding on them. 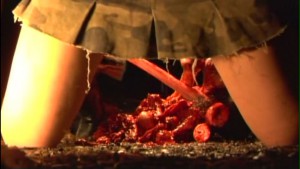 At some point you actually get to the plot, which is pretty much ripped from Friday the 13th, where a boy is teased and ends up dying, then comes back to kill people. But he comes back as a scarecrow. I thought Rise of the Scarecrows was the only time the undead came back that way, but apparently I was wrong. I’ll give credit though, they tried to at least explain why in this one. The boy died while climbing a scarecrow while the field burned. They don’t explain why the scarecrow is apparently gay though. He stabs people with corn too. Yay.

So the plot doesn’t exist, so as far as I can tell, they were trying to show off their skills, or hopefully just trying to have a silly time while others get tricked into watching. All I can say in any case is that it was far better than 667: Neighbor of the Beast.