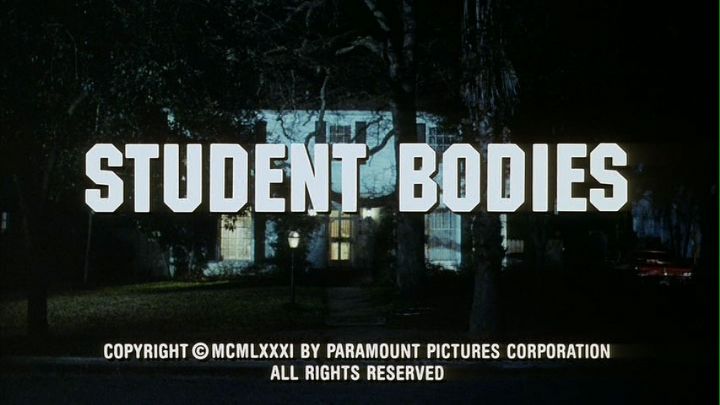 It seems like recently, only a few movies can come out before they are lumped into the parody movie of the month. Most of these don’t really have a plot. There’s a basic flow and a few characters, but mostly they are a series of scene re-enactments where everything it set up as close to the original, then something (sort of) funny happens and they break character before moving to the next. The scenes run the movie rather than having a normal movie with funny ‘nods’ to other classics.

Much like Airplane!, which is a successful application of the parody genre, Student Bodies takes a plot that could have been its own serious slasher movie, and then peppered it up with silly antics from the killer. The film benefits from being an early entry and hasn’t learned any bad habits from the millions of clones yet. 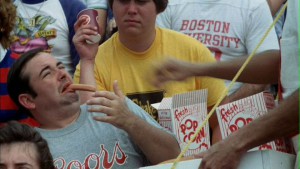 The jokes are sparse, luckily, and pad out an otherwise ordinary performance. Things like cheerleaders at a funeral and the killers terrible luck stepping on gum stand out. The recurring joke about the importance of horsehead bookends was another odd yet amusing addition. Also throughout the movie, we’re presented with large titles pointing out obvious observations about the possible suspects or their motivations. In this regard it becomes somewhat self-referential, but it isn’t too blatant. Well it is blatant, but not too annoying. 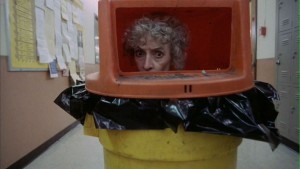 The movie is also notable for not being too offensive. Unlike the Scary Movie franchise, there isn’t really much that would be TV unfriendly. Although the plot revolves around the slaughter of promiscuous teens, that is only played on lightly. However it did gather an R-rating. This was due to a segment in the middle where they openly state that there isn’t enough offensive content, so they drop an F-bomb just for the sake of getting that rating. In real life, that was no joke and it actually caused the increased rating.
Next Post
Previous Post
Next Post
Previous Post