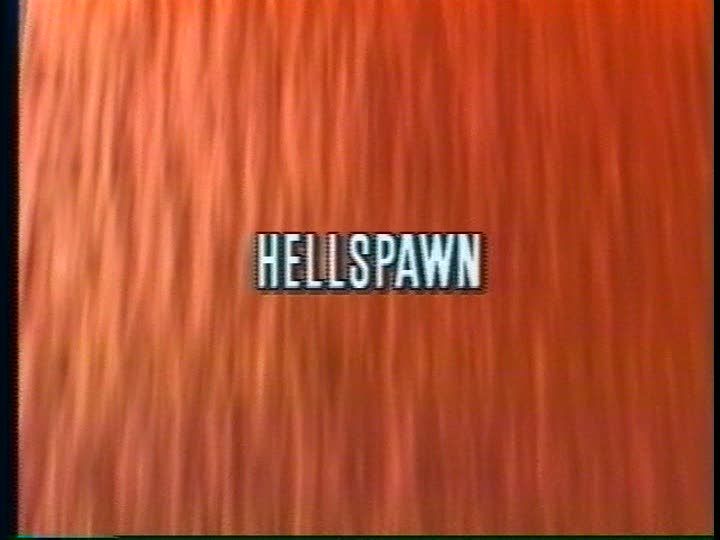 And here we are, the final disc in the Spawn of Satan 4-pack. As I’ve come to notice, Satan was noticeably absent from pretty much all of these movies. I think this one comes close though. I also was hoping that the last movie would be the absolute worst, and there’s no doubt that I struck gold here.

It’s apparently by the same guy who did [Night Crawlers], and one of the extras here got promoted to lead actor for that movie. Well it was also the director’s brother, but pretty much most of the cast played similar yet expanded roles later on. That said, this movie is absolutely hilarious. In fact, I’m seeing flaws in my rating system since it is so bad and perfect for riffing that I want to max out the Bad-Good side, yet that would put it in the same category as Monsturd and Terror Toons. I can’t very well put it in the Bad-Bad extreme as it was enjoyable for all the wrong reasons. This leaves me no way to convey the extreme absurdity of this effort. But such is life. [break] 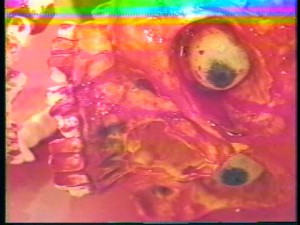 If you thought the bug creature in Night Crawlers was bad, the attempt at a bipedal humanoid is all the more awkward. The baby version of the demon doesn’t even move, they just prop it up on a stick and wave it from side to side. The adult version wears red flannel and a mask. Acting remains wooden as always, but the friend of a friend does an okay job. At least he doesn’t act like a camera is in the room and he needs to address it. The voice work though was recorded live, and then the gain was pushed up during the dialogue. This means very loud noise and crickets over some muffled voices, followed by an abrupt silence as the volume returns to normal. Even worse, at times the audio is cut out completely, I guess in an attempt to have a clean sound but the pure silence is somewhat more jarring. Ambient crickets are far from a negative during quiet scenes.

With all the talk of terrible effects and acting, it would be a gaping hole in the review if I didn’t mention the bathing scene. Now we wouldn’t normally go into detail about gratuitous exploitation, but that’s totally not where this is going. You see the opening scene wants to take a page from Halloween where a killer attacks a vulnerable young women in the midst of undress. But as a film maker, what happens when you don’t have access to a willing female participant? Well logically, you cut the scene and do something else. But no, that doesn’t stop our fearless director. He takes one for the team, shaves his legs and does it himself. Carefully cropping out anything except limbs mind you, but the hairy arms are just not right. After some voice dubbing, off-screen screaming, and an effect that I guess tries to convey that a demon claw can completely scalp a victim, the scene is complete. Later with a montage of dead bodies in a house, we apparently get an outtake from this scene and are presented with an underwater butt. Great! 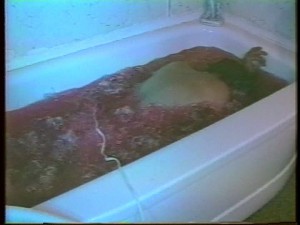 The premise starts with a woman in labor being yelled at by her doctor. She isn’t trying too hard since she claimed her husband raped her, and this apparently is enough to turn the child into a demon. Once born, it kills the doctor and priest then jumps out a window into the forest. Cut to the present, and two dudes are heading out to the country to fish or something. The next half hour is saturated with nothing of substance, if you can imagine that (I can’t). But once in a while, we see a shadow or piece of the demon escaping into the forest once again.

I talked about the monster’s visuals, which is one whole mess, but its behavior just defies explanation. After it blatantly kills a whole family, it goes out back to its house (it lives with a guy?) and cries. At first I thought it was dancing around with a whistle trying to lure someone out, but it was actually just sobbing near a pile of bodies. Later it adopts a doll from another family that he killed, and tenderly hugs it. So after brutal murder, he feels bad. I’m not sure where this really goes. 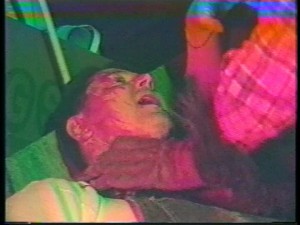 All the while, the two main characters do nothing. The scenes end up back with them, but they’re either driving, checking out houses in the dark, or staring at a lake while relaxing. The throwaway characters play more of a role. Halfway through the movie, they have yet to see the monster or even become aware of it’s presence. Maybe the dialogue would provide some clues, but as stated, you can’t hear it. Finally 50 minutes into the 1:20 movie, the guy who can act had one beer at noon and ended up still so drunk at night that he sprains his ankle on flat grass. The demon runs up to him and pukes franks and beans onto his face and then leaves. Additionally the musical score kicks in, and I’d bet quite a bit that it was lifted off a western from the 50’s. I’m not a betting man either.

It then turns into man vs. monster, with hilarious results. The fight scenes involve soft blows, with hard hitting sound effects. This is after they blow up a house with a microwave and crash a burning car off the highway to defeat the demon. All it wanted was to be read some fairy tales. Really, it wanted to be read to. But just as the demon seems to be indestructible, the heroes appear shares the ability to be stabbed through the abdomen and come out fine. 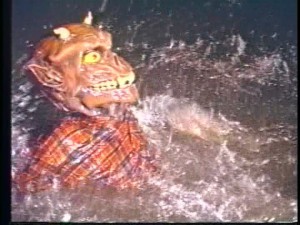