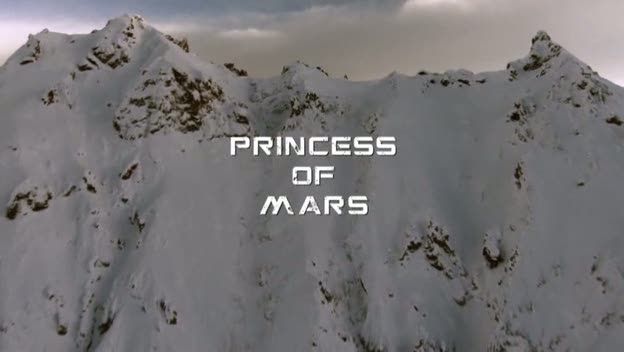 If you’ve never seen a film produced by The Asylum, then I envy you for being happier than me. They are a sinister cabal of marginally talented people known for preying upon the unwary. Let me ask any of the Gen Z’s out there who may be reading this: have you ever asked your grandparents to get you the movie Transformers only to have them send you Transmorphers without realizing their blasphemy? How about Snakes on a Plain only to instead receive Snakes on a Train? The Asylum has been cashing in on these subtle differences between their movies and major motion pictures for several years now. This one in particular, Princess of Mars, is a little strange in that they are clearly mirroring the upcoming Pixar production, but overshooting it by at least two years.

It would not surprise me right now if the name[break] “Edgar Rice Burroughs” meant very little to anyone reading this. However, what if I say Tarzan, then? Surely you must recognize that. Well, Mr. Burroughs wrote that story along with a myriad of other swashbuckling tales of manly gumption and women in distress. However, what few people realize was that prior to this landmark piece, he penned another series starting with a story called A Princess of Mars. Now I know what you must be thinking. The title is hardly evocative of bare-chested, muscly men stalking through the uncharted dangers and wilderness of exoticism. I assure you, the title is as feminine as it gets. 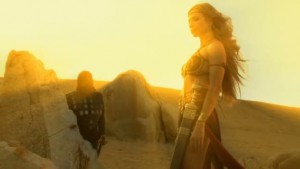 I read A Princess of Mars rather recently while I was working on my own manuscript (still am, hence the five month disparity between posts). As you might expect, I thought what any reader might feel having grown up with Ernest Hemingway, C.S. Lewis, and J.R.R. Tolkien. It was a shallow puddle of white-knuckled action, climactic battles, brutal violence, and a heroic struggle. It was, and still is, the quintessential example of 20th century classic pulp fiction. A dime-store novel meant to be read while you commute on the subway or lie awake under your covers along with your piled issues of Amazing Stories. I couldn’t very well dismiss this story simply for how it was written. At the time, this sort of writing was acceptable. Hating this book now would be the same thing as hating an old movie just because it’s in black and white. I buckled down and read it all the way through, keeping in mind that I was channeling the mindset of a person from 1917. We hadn’t been to the moon, let alone thought about Mars. We had no idea what any of it looked like and we were just about to be delivered from the throes of World War I. It was an out of this world story that tantalized the mind and the imagination.

I say all this because despite its pedigree, I dare say that this particular novel has not aged particularly well with the times. I’d be a fool for hating The Asylum’s film adaption solely because it destroyed the integrity of the book. Some might ask what integrity? General themes of misplaced people, stalwart heroism, and women to be ravaged by their captors adorn this film like the book, however the film fails for this exact reason. It lacks anything remotely resembling an imagination and quickly sinks to a boring, by the numbers arc that terminates into an uninspired and unsatisfying end…perhaps unsettling, too, as they clearly want to make a sequel. 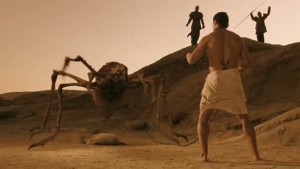 In the novel, our minds fill in the blanks providing us with a rich, desert planet of Mars. War-torn and savage, but beautiful and exciting. Charming and imaginative creatures populate this world and whether it’s the four-armed green martians or the vicious alien mounts know as thoats, it’s all unlike anything you’ve imagined or seen (at least for the time it was released). In addition, little kernels of mythology and mysticism pepper the narrative allowing for reasonable depth should one choose to over-think the story. Themes of astral projection as well as immortality and telekinesis all serve to balance out the story making for a meaty little myth that basically equates to one man’s struggle from rags to riches.

The film contains none of these things. The creatures are boring and unimaginative, at least one of the sets looked like it was filmed in The Asylum’s basement, and for God’s sakes why Traci Lords? I don’t know her personally so I really don’t have anything against her, but she fits into this role about as much as a white man playing Shaft. In this film, she plays the role of Dejah Thoris, the red martian princess for whom this story is named after. In the book, she is described as both beautiful and courageous, with exotic good looks, and a dark, reddish skin as smooth as silk. What we get is a Caucasian female, blond, trying her best to fit into a metal bikini while jowls of skin hang from her skull like barbels on a catfish. The green martians are rubbery faced aliens that could just as easily be humans wearing masks. Yes, I know that they are actors, but that’s kind of the point; they don’t look alien enough. 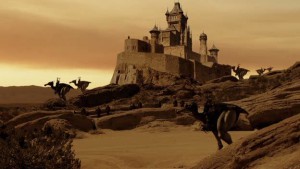 The film also attempts to retcon the chronology of events in the story. Instead of starting out in the American Frontier of the 19th century, our story starts out in Iraq in the presumably present-day. John Carter isn’t a peerless, immortal fighter immune to the aging process. He isn’t a fearless warrior who can gun down companies of Native Americans with nothing but his six shooters, he is a boring, generic marine on a mission to shoot terrorists. When his mission is a bust and he is left for dead, the US government recovers John’s body and presents him with an ultimatum: go to Mars using this idiotic technology we made up or die here on the examining room table. Wait a minute? I thought we knew that Mars is uninhabitable. You’re right and since this isn’t the early 20th century, the writers decide to make it ANOTHER planet that just so happens to be called Mars. Really, it’s just some desert in Nevada.

Everything this film does to breathe life into its own failure is just a chore to watch. You quickly realize when you hit the thirty minute mark (and there’s still sixty more to go) that this film ended about ten minutes ago. Any creativity they can possibly muster is executed as some kind of squeeze play to stretch this horrifying mess to feature length in hopes that you’ll stick around. I don’t recommend you avoid this movie because it destroys the integrity of the novel, I recommend you avoid this movie because it is simply a bad movie.

On a lighter note, come what may of the 2012 production, Pixar’s first live-action film John Carter of Mars will invariably be a million times better than this piece.