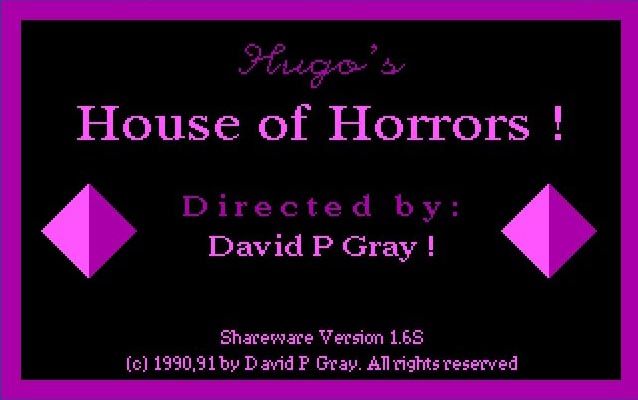 It’s finally Goshtober! I’m pretty excited to write about some SpOoOoKy vIdeO gAmeS. Hugo’s House of Horrors isn’t really going to scare you unless you’re particularly faint-hearted, but I figured I would start the month out with one of the more G-rated horror games. Just to get you warmed up. 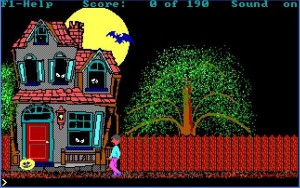 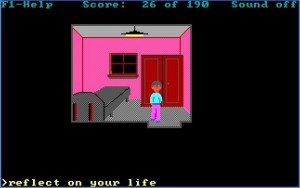 Hugo’s House of Horrors is a parser adventure game starring Hugo, who is trying to rescue his girlfriend Penelope from a haunted house. This game doesn’t beat around the bush. You barely have time to look at the title screen before you find yourself on the front lawn of the haunted house. It won’t take you long to realize that everything in the game looks not so much like the setting of a horror story as much as it looks like a random assortment of your mom’s Halloween decorations. Seriously though, the very first screen shows a haunted house that looks almost exactly like one of those little ceramic haunted houses that you put a candle in. All the windows have creepy eyes peering out of them. The banister is all crooked and broken. There’s a goofy pumpkin on the porch and a bat flutters in front of a full moon. You are not just about to enter a haunted house, you are about to enter THE quintessential Haunted House™! 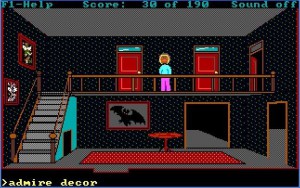 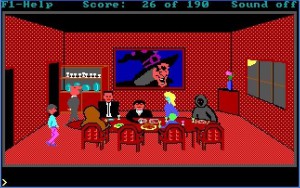 Inside the house you’ll find an assorted cast of classic horror icons. Let’s have a look at one of the first rooms you’ll come across: The dining room. It looks like the whole family’s here. We’ve got Frankenstein’s monster, Joe Pesci as Dracula… uh, the infamous… um, Green Woman? It seems like they kind of ran out of movie monsters pretty quick here. I’ll admit that guy in the cloak is pretty creepy, but what is that brown thing in the foreground? If you try to further examine any of the dinner guests, the game responds with an extremely helpful “Just your regular old monster type”. So this room’s still a little confusing to me, but hey! How can you argue with that enormous portrait of the family matriarch? There’s also a mad scientist’s laboratory, a dog that will sit on you until you are dead, and a strange old man who requires that you answer various riddles and pop culture questions before he will let you pass. 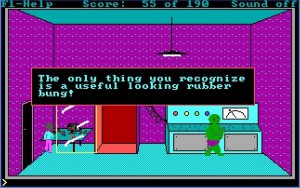 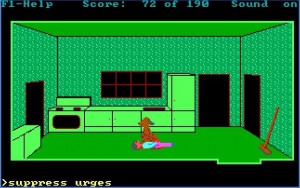 That’s pretty much the whole plot right there. Past the fact that Hugo dresses kinda funny, we never really learn anything about him. He never speaks. He never gives us any hints of personality. I guess he is supposed to be an everyman that you can easily identify with… if only he wasn’t wearing those absurdly pink pants. After a while he does kind of grow on you though. Personally he’s a hero that I love to hate. There’s an odd charm about how he wanders about with an awkward, dopey gait and how the game’s weak parser responds to almost everything you type with “Apparently our hero doesn’t understand what you mean”. 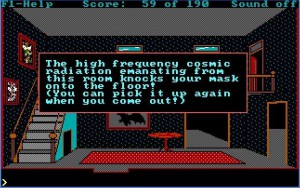 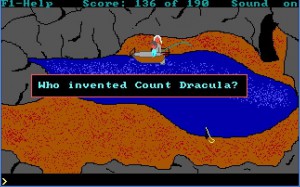 For those of you who actually made a habit of leaving the house between 1984 and 1991 and don’t know what I mean by ‘parser’, a “parser adventure game” is a game where you control the main character by typing in exactly what it is you would like him or her to do. The upside to such a system is that it allows the player to get creative and type in all sorts of wacky things for the game to respond to. The downside to this is that the game’s parser system may not always be equipped to handle a very wide variety of phrases and commands. That’s what I mean by a “weak parser”. ‘Hugo’ requires you to input very specific commands to make progress. 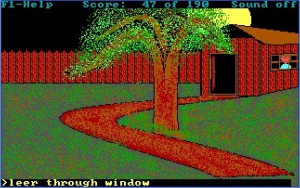 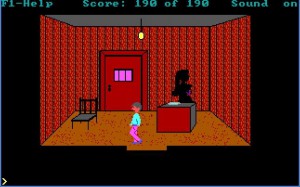 Due to the fact that the entire project was put together by a single man, Hugo’s House of Horror’s is pretty short. It probably won’t take you more than a hour to beat the whole game. But it’s got a bizarre appeal to it. It produced several interesting sequels that I’ll probably bother you about in the near future. But for now, you should get your Hugo on at http://www.dosgamesarchive.com/download/hugo-1-house-of-horrors/
Next Post
Previous Post
Next Post
Previous Post