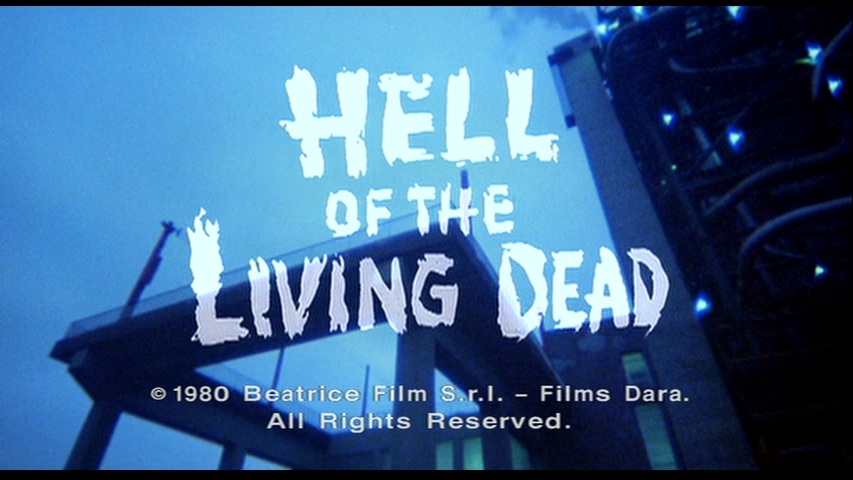 Our story begins at a HOPE station in New Guinea where some egghead scientists are surely cooking up some kind of perverse affront to God’s creation. The viewer is not immediately privy to what kind of work they’re doing, but the answer becomes all too clear in a matter of seconds. Some scientists in hazard suits are doing a routine check-up when they stumble across a dead rat. Baffled by how the rodent made it into the sanitary section of the area, they are taken by surprise when the rat reanimates and bites one of the scientists. In literally a matter of minutes, the rat bite triggers a zombie outbreak. Zombie scientists begin killing their colleagues adding to the horde or devouring them. 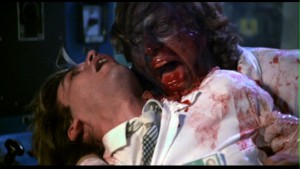 Meanwhile, in another part of the world, a Special Forces unit infiltrates an American embassy where some very important dignitaries are being held hostage. Though the terrorist group is never identified, their mission is clear. By holding these people hostage, they want to pressure the world into closing down all of the HOPE stations around the world. Perhaps the world should have listened.

Hell of the Living Dead is by far a much more passable zombie film than a lot of the stuff sent over from Italy. Not only does the movie actually involve zombies, unlike Zombie 5, it also manages to keep with the spirit of the Romero Dead series. Special effects are convincing and grotesque and the film has a much more realistic slant to it in terms of a viral outbreak, as a opposed to evil voodoo magic nonsense like Zombie 4. 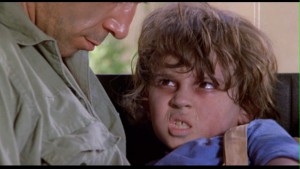 One thing I was very pleased with in the film was the unflinching harshness of the situation. At one point a child becomes zombified, thereby acting and resembling little more than a corpse, but with none of the humanity. Of course, the Special Forces men have no other choice but to eliminate the zombie child or it will infect them or someone else and try to eat them. What we see is a ravenous beast resembling a child being shot dead.

The acting in this particular film is especially over-the-top and the dub only makes it more ridiculous. Since, by this point, you shouldn’t be trying to find any kind of deep or moving story, you should enjoy the ride for all the unintentional humor in the dialogue and acting. One character in particular, Osborne, is surprisingly endearing despite his manic vocals and cut-throat nature. He is also the only person who seems to have zombie killing down to a science as he constantly shrieks at people to aim for their heads. 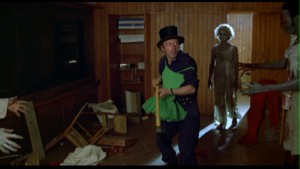 Hell of the Living Dead stands apart from a lot of the zombie films of that era. Sure you’ve got campy moments where interaction with the New Guinea natives is nothing more than stock footage of natives engaging in rituals spliced into the film, but the rest is grade A meat. The acting suits the overall tone of the situation and the director really did a nice job of foreshadowing some sort of all-encompassing conspiracy with the terrorists in the beginning. This is not the Citizen Kane of zombie movies, but it certainly is a step above the all too common “let’s make a movie and toss in a couple zombies and there we have a feature” cop-out. A logical progression and a logical ending are present and you can’t really ask for more than that in a zombie/apocalypse film.
Next Post
Previous Post
Next Post
Previous Post