Back for his third attempt, Goshzilla again terrorizes those who foolishly enter his domain. We start of with two people who are arguing about a CD holder. But it is not a CD holder, not even the great Rappin’ with the Homeboys CD. Surely this can only be resolved though a fight at the park. 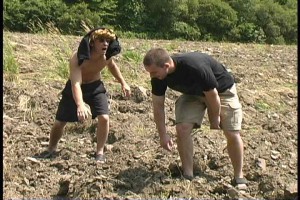 Down at the park, they notice the iconic rocks from years past have been removed. This further angers one of the men and he proceeds to beat the other. But this is stopped once the realization that Goshzilla is around, and thus they escape into the barren corn fields after being tricked by Goshzilla in a wig.

Hungry and dying of thirst, they attempt to eat rocks as it may be manna from Heaven, but alas it is not. Instead they are chased and attacked by a landshark. Only one knew of the legend beforehand and managed to escape. 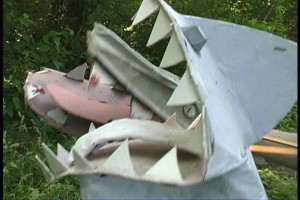 Only alone for a second, the remaining survivor meets a new friend with a luxurious head of hair. They prepare to do battle with the landshark when they are flanked by Goshzilla on the otherside. By ducking, Goshzilla and the shark collide together and are forced to fall in love. They head off into the forest to be married, while the survivors walk away.

A lovely song is played.