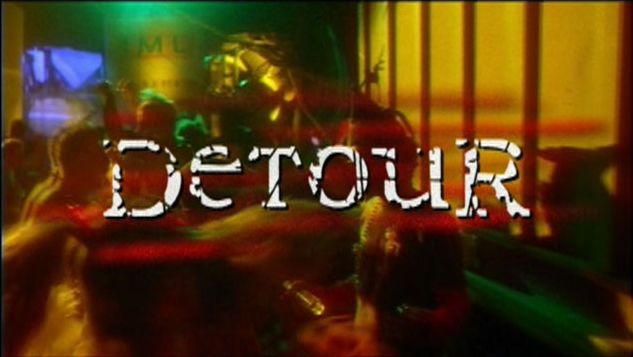 Part of the way through this, I realized it was pretty much the same plot of the Hills have Eyes remake, right down to the broken down RV, and mutated hillbillies. However, despite the other movie having more professional gore elements, I did find this one much more entertaining.

Off the bat, you can tell the director likes neon, and for that alone he shall receive praise. Neon is rad…or bad, like a power glove. However the glitz is just there to get your attention until we meet the colorful (neon) cast. After an all night rave, a group of twenty-somethings are heading off home, or randomly into the desert, I forget. Normally I hate movies with either road trips or twenty-somethings, and the combination here could have been disastrous. However the director decided to make the characters interesting rather than whiny. Half are bubbly, and the other half overplay their stereotype enough so it doesn’t fit the mold. Plus it’s an RV not a car, so he ducked that one too. 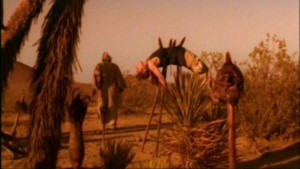 We have a group of two giggly girls, the goth girl, some random couple who are the least interesting but make good killing fodder later, a white homeboy wannabe, and then the driver who wants mushrooms. In fact the story revolves around driving into the desert at this point to find some mushrooms. Most object, but the vague possibility of money through resale helps convince the rest. This of course goes wrong when the driver thinks he sees a girl in the road and crashes the RV into some rocks, thus leaving everyone stranded and without mushrooms.

The driver heads back to the last gas station for help, but it’s of little use since the owner is busy hiding in the freezer. We think he’s dead at first, but it turns out it’s just a trick. He probably is able to pull it off through long years of practice the immobile arts like watching TV. Soon enough some mutant hillbillies show up and cause trouble. Of them all, one stands out and wields a hook made of re-bar. 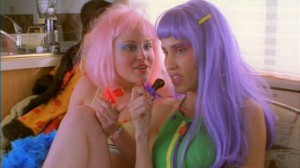 Back at the RV the remaining crew aren’t fairing much better. The white homeboy is probably my favorite character at this point since he plays the part perfectly. The overacting is priceless. Probably i real life you’d hate him, but it works here. Well the goth girl gets attacked and almost dies, prompting the homeboy to give a fairly good performance grieving her loss. I’ll have to give him credit for that.

So the copy of Hills have Eyes wouldn’t be complete unless they survived the night and found the mutant’s home base. They also stumble upon some toxic dumping grounds which explains the mutations. In this instance the toxic nature can be temporary, as one of the crew turns cannibalistic briefly, but they get over it. Conveniently they find some guns and in a stroke of luck the Shannon Elizabeth clone (who is played by someone with the last name of Elizabeth, yet is no relation, how odd), turns out to be a Republican and knows how to shoot. So between this turn of events and the gratuitous use of neon, this is a win/win scenario. Good times for all. 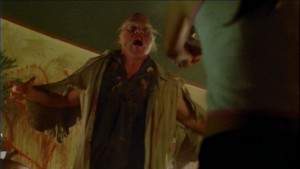 The movie doesn’t really drag at any point, and if you look past the similarities of the other mutant hillbilly movie and just see this as a more colorful version, then all will be well.