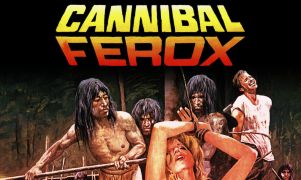 I don’t know why I got this film. Maybe I just chickend out of Cannibal Holocaust; although I can’t find it in a reasonable price range on eBay. I’ve kicked my eBay habit anyway. Having no money helps a bit, but the bidding wars get to be a pain to keep after. You have to be there at the instant the auction closes to guarentee getting it, or someone else will have plenty of time to snag it from you. But enough about eBay; I didn’t even buy it via them anyway. This is some second generation at least, that I got for $4. It’s on DVD now, but I don’t think I care enough to spend money that I don’t have on it.

Once the king of all cannibal moives, Cannibal Holocaust came out in ’78, everyone ran out to make their own. ‘Everyone’ happened to be only Italian people, but the movie was banned in every other country so the span of influence was short ranged. The only other clone I’ve seen is Slave of the Cannibal God, which was pretty much the same except it had an evil midget cannibal, who’s brains fell out at the end from falling down. Once I get a DVD-rom, or someway of capping from DVD’s, I can get that up here. It was sorta dumb though.

On to this movie. Some girl is doing her thesis on proving that cannibals don’t exist. For the most part they don’t, but just her luck, things change just in time for her arrival. She’s got to be pretty dedicated to travel all the way down there just for a degree. As lazy as I am, I’ll be content with knowing that I don’t have the willpower to risk life and limb for educations’s sake. Plus how do you determine something doesn’t exist just by poking around the first area of the jungle you happen to crash into. I don’t know, but I’m not getting a degree in anti-cannibalism.

But before this there’s a rumble in New York where some guy named Mike is missing and his homey who just returned from the hospital gets shot because Mike stole a lot of money. Done with that

The girl, her brother and her friend all arrive in Brazil to set off for their expedition. After getting some guidance from the locals. They take a boat out to the jungle. Some guy grabs a butterfly and eats it in front of them, and another woman gives them some furry animal for good luck, I assume.

Once there, they all hop on a jeep and promptly get stuck in the mud. They push themselves out and flip a coin to determine whether or not to go on. It lands on heads, so they push forward and get stuck in more mud. So they give up and keep moving on foot. They find a real ugly dude just sitting there eating some sort of larvae, totally oblivious to the people around him.

They call in a night and go to sleep. The next morning their furry animal gets attacked by a snake and they just stand there and watch. They didn’t attempt to save it, but I bet they felt bad. After soem more random poking around, they find two natives dead, after seemingly getting caught on some traps. Two other guys pop out of the bushes, one limping and the other with a grimacing face.

Turns out this is Mike from the beginning of the movie. He talks about how some cannibals attacked him and his homey. The horror. They decide to help each other out. After another night’s sleep, the thesis girl is missing. They split into two teams and go out to find her. The thesis girl’s brother and Mike’s partner find a village with old native and seom dead bodies lying around. The old people don’t seem too responsive to the newcomers and just sort of sit there and stare. Mike discovers thesis girl first in a pit with a pig. He jumps in and stabs the pig, and if you’ve seen Survivor 2, it’s about as shocking, and just as real.

So at this point we’ve had 3 animal killings, but no cannibals. Once the group gets back together, they camp out in the village. Mike goes off to torture villagers while his partner tells thesis girl and her brother the real story behind the cannibals. In reality, there were no cannibals (yet). Mike had stolen some money in New York from gang members who are not very happy, and traveled to Brazil to escape. There they met a local who promised some jewels, and Mike made him and the villigars he led them to, sift through the river to find more. When there wasn’t any more, Mike got too much cocaine in his system and went on a rampage. This destruction caused the natives to rebel and chase Mike and company out, where they met the thesis girl and her friends.

Mike’s partner gets sick and eventually dies. But before that, we move back to New York where the police pull a tour guide off her shift and question her about Mike. She doesn’t know much, so we go back to the jungle.

Okay, now, Mike’s partner dies. Thesis girl and her brother wande arond and find out the Mike and the other girl have left and take all the supplies. Even the credit cards, which seem to be the biggest worry right now. They walk back outside and see 3 natives walk into the village, so they hide. Now these natives are the healthy males, while the ones they’ve seen before were only the elderly. The natives find Mike’s homey all dead inside, so they drag him out of the hut and cut him open, then enjoy tasty guts.

They run away from this horrid mess, but dopn’t get far before they are surrounded by natives with pointy sticks. They get dragged back to the village where they meet Mike and the other girl being dragged back as well. Everyone except Mike is put in a big wooden cage. Mike receives various forms of torture similar to what he did to the natives he tortured.

But that’s boring, so back to New York where the tour guide is roaming around a park and two gangsta’s hassle her because she knew Mike, and they’re gonna bust some caps. But luckily the cops have been following the woman and chase away the bad guys.

Over night, they hear screams from Mike, who is having his wounds burnt shutso he’ll stay alive longer. Then they get a complimentary boat ride to some other village. Thesis girl and her brother plot a scheme where they will distract and run. The brother gets away but trips and then gets his leg eaten by a fish. He jumps out of the water and tries to plead with the natives, but nooo, they shoot him. Back at the village, they put Mike in an underground pit and the girls in a carved out hill. They begin to sing and annoy everyone, so they pass down some guts, but of course they don’t want that.

Now more, subplots involving tour guides and NYPD that go all the way to Brazil to track a guy who stole money from gangsters. Dedicated people, they are. First research papers, then police work. No wonder the 90’s are so unproductive, people won’t go to Brazil for the little things. Anyway, I don’t know what happens here. I think they talk to the police guy from the beginning of the movie about Mike. Then that’s over.

One of the native boys who was saved from Mike earlier in the movie tries to help the girls out, but mike escapes, chases the boy away, and cuts the rope that would allow the girls to escape. What a stinker. He runs away and tries to flag down the sea-plane that’s being driven by the New York tour guide and police guy. But after no luck, he is recaptured by the cannibals and his hand is chopped off, then dragged back to the village.

Thesis girl’s friend is then taken out of the cave and is killed off in a disturbing way, which I won’t tell you about. The tour guide lands the plane and finds the jeep that was stuck in the mud. Some native gives her clues to the whereabouts of the rest of the people, but this never ends up helping.

Mike gets his head placed in a cutting board and his head is chopped off. The top part anyway; then they eat his brains. Thesis girl, later that night, is helped by the native boy, and they escape. but he trips on something and gets stabbed by some spikes. Later some random fishermen find thesis girl and she gets her degree.
They all live happily ever after.

Well, what you have here is a movie about guts, eating guts and killing animals to make a movie. PETA would not be pleased if this movie came out today, and soccor mom’s would protest. This got banned in many countries, like 31-33 or something. It can be a bit shocking to see and is pretty raw. The animal parts are by far the worst, although after the discovery channel and the health channel, the blood and animal vs animal footage is pretty much the same.