This game came my way from a friend right after graduating from junior high. At the time, we were all in the height of Barney hating. I’m sure it would have been easier to just ignore the show, but I’m pretty sure built up rage would have manifested in drowning a puppy or something, so taking it out on a stuffed dinosaur was the best option. Way back when, I had an anti-Barney page. Even though it was just a bunch of links to other places and no original content, the web was young and any website would get traffic fairly easily. Elsewhere there were pages where you could maim barney by pasting wounds on a .gif image. Other sites had fan fiction, like the epic ‘Day of the Barney’, which constructed an alternate reality in which Barney takes over the world, has children kill their parents, and then impregnates young girls so the ‘loved ones’ can be born and help him with his empire. Boys are killed and their skin turned into drums. 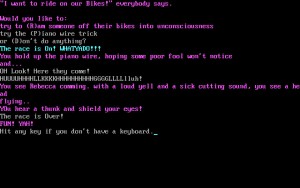 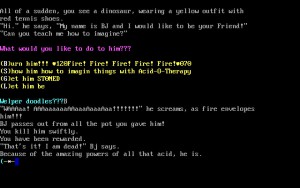 I know I have a hardcopy printed somewhere, but all that is gone now. Luckily I was still able to find this game out there somewhere. It’s entirely text-based, and was originally run off a BBS, but the author also created a standalone version. After a quick bootup, you enter your name and you’re off an running.

The game breaks down like this. You are on the Barney show for one week and need to do as much damage as possible, both to the show and to the cast. Throughout your time, you go on trips and do activities, each offering a choice of actions. You usually get three to four options and the events play out from there. Additionally staff members of the show who hate it as much as you will give you substances to help weaken the cast and make things a bit more hectic. 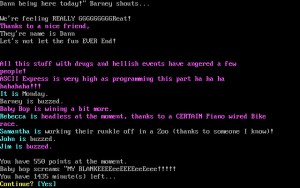 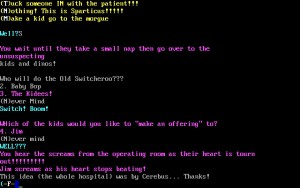 While you get a few choices per event, they do run somewhat linear. You should have a 50/50 chance of it doing something destructive. It seems most of the time the choice will fall flat and not work. Although as the week moves on things do seem to get a little more out of line. Some things work on a point basis, and at the end of the week, you do get a final score. Other than that you try to kill off the kids, Baby Bop and Barney. Barney should wait until the end of the week though as you won’t be able to continue the show without him.

So some activities include traveling to a baseball game, the zoo or even a concert of your choice. There’s ample opportunity of mayhem at each turn. Even getting to the event can be used to cause trouble as you can blow up the bus or cause some engine trouble. At the end of each day you get a status report and move to the next. Ending the week gives you the chance to have a final showdown with Barney. The version I played didn’t have a complex ending, but there seems to be a Zork-like game now where you need to travel and find Barney. 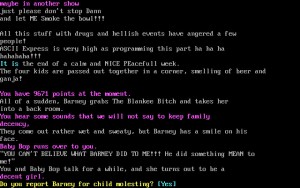 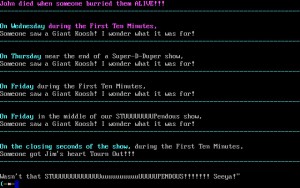