Few reviews feel as painful of a process as this one. I’ve had the title screen capped for months now, and if it weren’t for today’s original movie missing the final scene, I wouldn’t be scraping up movies I sort of watched just for an excuse to not re-watch a new one.

Truth is, it really isn’t that bad of a movie, I’m just bellyaching since I can and it’s Thursdays. Thursdays suck as usual. The story follows two young nurses on holiday (it’s a British movie, so I’ll use British terms), as they cycle through France. They spend most of the journey on long stretches of road and stopping at the cafés along the way. 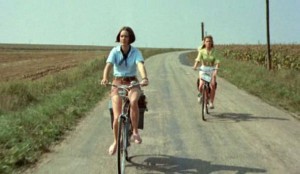 However combining two women for any length of time is a situation from with no good can come. Naturally they stop to rest a bit, and one wants to sunbathe while the rational one wants to make it to the next stop before dark. This is a time before the ‘agree to disagree’ cliché, so they just plain disagree, so the rational girl leaves her in the forest and grabs a bite to eat.

However after talking with the restaurant owner, she finds out that this road has a history of female murder victims, so it might be best to head back and check on the friend. I should note that much of the dialogue is in French, and there are no subtitles. While this may seem like an oversight for the viewers, the lead female can’t understand them either, so it adds to the confusion almost perfectly. 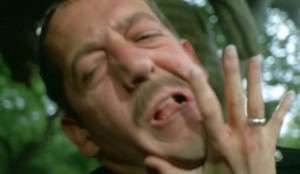 After heading back to the spot where she left her friend, there is no trace save for her camera. People in town don’t offer much help save for one man who offers to revisit the scene and try to see what happened. He acts somewhat creepily though. The other help comes from the lone policeman, but he’s not much of a help either.

The remainder is filled with a lot of moped scenes and not much else. The fate of the girl is held off for a good hour, but the ending isn’t easily guessed, so it’s satisfactory in that case. Overall not a bad movie, and I suppose this review wasn’t as painful as I anticipated.